Ansu Fati Injury Update: Barcelona Teenager Could Be Out For Months Due To Torn Meniscus

'Tests carried out on Saturday have shown that the first team player Ansu Fati has torn meniscus in his left knee. In the coming days the treatment necessary will be determined.’ Said Barcelona in their official statement regarding Ansu Fati’s injury. 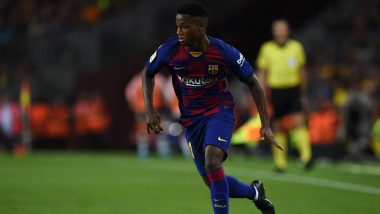 Barcelona’s teenage sensation Ansu Fati picked up a knee injury in the club’s 5-2 win over Real Betis on Saturday (November 7) in La Liga 2020-21 and could miss months of action due to it. The youngster was crucial in the game but was replaced at half-time by Lionel Messi, after feeling some discomfort. The 18-year-old had a decent game before his substitution, winning a penalty, which was missed by Antoine Griezmann. Lionel Messi Leads Barcelona to 5-2 Win Against Real Betis.

'Tests carried out on Saturday have shown that the first team player Ansu Fati has torn meniscus in his left knee. In the coming days the treatment necessary will be determined.’ Said Barcelona in their official statement regarding Ansu Fati’s injury.

It is understood that the length of Ansu Fati’s absence will be determined by the kind of approach taken by the doctors. According to reports, the youngster might need surgery on his knee which will keep him out of the action for at least a time of three months, but if he opts out of an operation, the 18-year-old will be on the sidelines for 3-4 weeks.

LATEST NEWS ‼ Tests carried out this afternoon have shown that Ansu Fati has an internal meniscus tear in his left knee. The treatment to be followed will be determined in the coming days. pic.twitter.com/CF3FZaur5P

Ansu Fati has been one of the revelations at Barcelona, as despite being 18, the youngster has solidified his position as a starter in the team. The teenager, made his debut last season for the club under Ernesto Valverde and has become the youngest player to score a goal in the club’s history.

This season, the Guinea Bissau born winger has had a similar start as well, being involved in nine goals (five goals, four assists) in 10 appearances in all competitions. Ansu Fati also became the youngest goal-scorer in El Clasico history, when he netted against Real Madrid earlier this season.

(The above story first appeared on LatestLY on Nov 08, 2020 08:49 AM IST. For more news and updates on politics, world, sports, entertainment and lifestyle, log on to our website latestly.com).