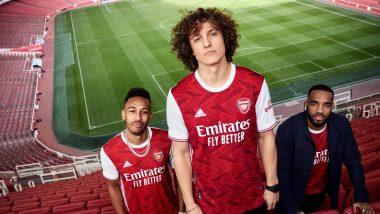 Arsenal on Thursday (July 23, 2020) unveiled their new home kit for the 2020-21 footballing season. The Gunners are ready to start a new era under Mikel Arteta and will do so with brand new Adidas shirts. The jerseys as anticipated are predominantly red in colour along with traditionally white sleeves. And on the new kit’s first look, the North-London clubs fans seem to be happy with the design. Chelsea Unveil New Away Kit for 2020-21 Season, Fans Compare Jersey Design to Manchester City (See Pics).

This is the Arsenal’s second kit under new kit suppliers Adidas, who took over from Puma in the 2019-20 season. The Gunner’s home shirt for the upcoming season, as expectedly sports the traditional red colour but also has a zig-zag pattern which is inspired by old art deco 'A' feature of kits in the 1930s. Barcelona New Home Kit for 2020–21 Unveiled, Fans Reminisce About 2010–11 Treble Winning Season (See Pics).

‘New Adidas kit, new @emirates logo’ Arsenal tweeted on their official as they revealed their new home shirt for 2020-21. In the hot, David Luiz, Alexandre Lacazette and Pierre-Emerick Aubameyang posed inside the Emirates Stadium.

Arsenal fans looked impressed with the new kits as one of them said ‘I support Arsenal in kits ONLY!’ While other had a historical take as they compared the 'great-looking' latest jersey to the desperate form the clip has been for the past few seasons. Here are some of the reactions from Arsenal fans.

I support Arsenal in kits ONLY! 😍 https://t.co/9HfSUSlOYj

Damn at least when we r getting smoked by Leeds we gonna look sexy https://t.co/YqXlBpeQU7

This will look so fire on us as we get relegated to the championship next season https://t.co/ImvpJ7hXEO

This is actually pretty peng, arsenal do always have at least one proper sexy kit a season https://t.co/7ZJ0h33dqu

Speaking of Arsenal this season, ten Gunners are 10th in the team stand-ins, which means after they cannot qualify for Europium competitions via their league position. However, Mikel Arteta’s men still can make it into Europa League next season if they manage to defeat Chelsea in the FA Cup final next month.

(The above story first appeared on LatestLY on Jul 23, 2020 05:01 PM IST. For more news and updates on politics, world, sports, entertainment and lifestyle, log on to our website latestly.com).