Athletic Bilbao vs Real Madrid final clash in Spanish Super Cup 2021-22 will be played at the King Fahd International Stadium in Riyadh, Saudi Arabia on January 17, 2022 (Monday). The clash has a scheduled start time of 12:00 am IST (Indian Standard Time). 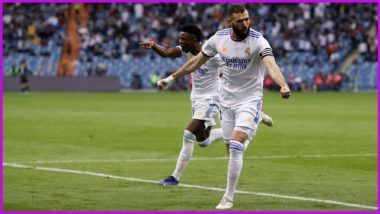 La Liga leader Real Madrid take on Athletic Bilbao in the Supercopa De Espana at the King Fahd International Stadium in Riyadh. The Los Blancos defeated arch rivals Barcelona in a pulsating semi-final to set up a summit clash and claim their first silverware of the season. Although the club did not make the best of starts to the new year, their loss against Getafe remains the only one in their last 19 games. Under the management of master tactician Carlo Ancelotti, Real Madrid are once again back to their very best and start the contest as the favourites. Athletic Bilbao earned the right to play in the finals by defeating Atletico Madrid and they can be tricky side to face if they play to their potential.

Asier Villalibre has returned to match day squad after recovering from a knock. The centre-back pairing of Yeray Alvarez and Inigo Martinez have a tough task stopping Madrid’s flamboyant attack. Skipper Iker Muniain is a drifter in midfield but should start on the left side of a four man midfield. Inaki Williams and Oihan Sancet are the two centre-forwards in the side and the duo bring in their pace and physicality in the final third which could be crucial this evening.

David Alaba and Jesus Vallejo are highly likely to miss the finals while Dani Carvajal is in quarantine following a positive covid test. Vinicius Jr, Rodrygo and Karim Benzema make up the front three with the ever dependable Toni Kroos, Casemiro and Luka Modric manning the midfield. Nacho Fernandez and Eder Militao will be the centre-back pairing for the Los Blancos with injury and absentees impacting the availability of players.

Athletic Bilbao vs Real Madrid final clash in Spanish Super Cup 2021-22 will be played at the King Fahd International Stadium in Riyadh, Saudi Arabia on January 17, 2022 (Monday). The clash has a scheduled start time of 12:00 am IST (Indian Standard Time).

Where To Get Live Telecast Of Athletic Bilbao vs Real Madrid, Spanish Super Cup 2021-22 Final on TV?

Unfortunately, the final clash between Barcelona and Real Madrid in the Spanish Super Cup 2021-22 will not be telecast in India. Hence, fans will not be able to watch the live action on their TV sets.

Jio TV is likely to provide the live streaming of the Athletic Bilbao vs Real Madrid final clash in the Spanish Super Cup 2021-22 in India. So, fans can tune into the JioTV app to get the online streaming of the super cup match. Athletic Bilbao will be compact in midfield and will try and hit Real Madrid on the break. Ultimately, the quality of the famed Los Blancos should make the difference in this closely contested game.

(The above story first appeared on LatestLY on Jan 16, 2022 08:36 PM IST. For more news and updates on politics, world, sports, entertainment and lifestyle, log on to our website latestly.com).