Several reports claimed that Sergio Aguero is set to retire from football due to a heart problem but new Barcelona head coach Xavi has brushed off those rumours. Aguero was rushed to the hospital earlier this season during Barcelona's La Liga 2021-22 match against Alaves after he complained of breathing problems. 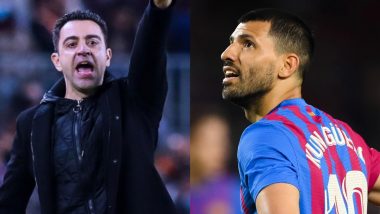 Barcelona head coach Xavi Hernandez has brushed off rumours stating that Sergio Aguero is set to announce his retirement from football. The striker who is recovering from a heart problem was reported to be putting an end to his football career owing to his heart problem. But in a latest development, the new Barcelona coach has claimed these reports to be 'not true' while acknowledging the fact that he is in the dark. "I do not know anything, I spoke with him the other day and what has come out is not true," Xavi said, according to Goal.com. "We do not have this information, I do not know where it comes from," he also added. Sergio Aguero Set To Retire Due to Heart Problem, Announcement To Be Made Next Week: Report

Xavi got off to a good start in his career as Barcelona head coach as the Catalan giants defeated Espanyol at home and after the match, he spoke about Aguero, his absence and revealed his conversation with the Argentine striker. Speaking to the press, Xavi said, "He is calm. I told him to come when he is well. It is a medical issue. We have to wait and find out."

Take a Look at the Video Below:

Earlier, Aguero himself responded to rumours of his retirement and taking to Twitter, he shared a message which translated to English as, "Given the rumors, I tell them that I am following the indications of the club's doctors, doing tests and treatment and seeing my progress within 90 days. Always positive."

The Argentine striker felt discomfort while breathing and experienced chest pain during Barcelona's La Liga match against Alaves earlier this year. He was taken to the hospital where tests confirmed that he would be out of action for atleast three months. Currently, he is undergoing recovery.

(The above story first appeared on LatestLY on Nov 21, 2021 05:01 PM IST. For more news and updates on politics, world, sports, entertainment and lifestyle, log on to our website latestly.com).