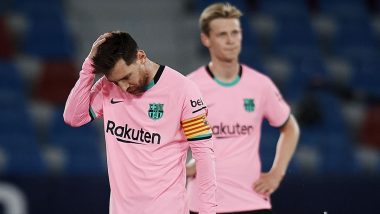 Barcelona lost to Celta Vigo last night at the Camp Nou and shocked the world. Santi Mina was the one who scored a couple of goals at the 38th and 89th minute of the game and the team to walk away with a stunning win. On the other hand, Lionel Messi was the one who scored the only goal in the match in the 28th minute. With this, Messi's team has scripted an unwanted record. This is the first time that Barcelona has gone winless for the first time in home games since Lionel Messi's debut in 2004. Celta Vigo Beats Barcelona 2-1 in La Liga 2020-21 Match, Santi Mina’s Brace Overpowers Lionel Messi’s Opener.

Check out the  unwanted records scripted by Barcelona:

Barcelona will finish outside La Liga's top two places for the first time since 2007-08 😳 pic.twitter.com/gkaSaIJeYU

Barcelona will finish outside La Liga's top two places for the first time since 2007-08 😳 pic.twitter.com/gkaSaIJeYU

(The above story first appeared on LatestLY on May 17, 2021 08:50 AM IST. For more news and updates on politics, world, sports, entertainment and lifestyle, log on to our website latestly.com).