Barcelona vs Napoli, UEFA Champions League 2019–20: Lionel Messi, Dries Mertens and Other Players to Watch Out in BAR vs NAP Football Match 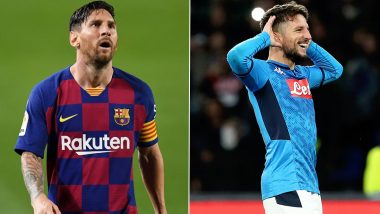 Barcelona will begin their chase of sixth Champions League crown when they host Italian side Napoli on Saturday (August 8, 2020) at the Nou Camp. The first leg between the two teams ended 1-1 courtesy of goals from Dries Mertens and Antoine Griezmann. This will be the first competitive meeting between the two teams at the home ground of the Catalonian giants, where they are unbeaten for 35 games. Barcelona vs Napoli, UEFA Champions League Live Streaming Online.

UEFA Champions League is the last opportunity for Barcelona to win a trophy this season but they have a huge task in front of them as the Catalans have a shortage of first-team players for this clash due to injuries and suspensions. The Spanish side have included nine B team members for this game but will be hopeful of getting the desired result due to their record at home. Barcelona Announces 22-Member Squad for Match Against Napoli.

Napoli, on the other hand, have history against them as they have lost their previous two away knockout games in the Champions League while Barcelona have progressed from each of their 19 UCL knockout ties after avoiding defeat in the first leg.

So as the two teams gear up for an important clash on the biggest European stage, we take a look at players from both the sides who could have a huge say on the final outcome of the game.

The Argentine was unable to guide Barcelonan to the La Liga title this season but will be eager to get his hands of the UCL trophy which has eluded him since 2015. The 33-year-old finished the Spanish league as top-scorer and top assist provider and will look to take that form into tonight’s game as well.

The Belgian will play a crucial role if Napoli are to stage one of the biggest upsets and get past Barcelona. The 33-year-old’s quality in front of the goal and the ability to find spaces will play a huge role in getting behind the Catalan’s defence.

The Frenchman saved Barcelona from embarrassment in the previous tie as his goal gave the Spanish team a crucial away goal and a slight advantage coming into the second leg. The Frenchman’s link-up play with Lionel Messi and Luis Suarez will play a crucial part in the Catalans getting on the score-sheet

The Senegalese defender missed the first leg due to injury but will feature from the start in this clash and will be looking to make a huge impression against one of the best teams in the world with several European heavyweights keeping an eye on him. His presence and leadership in Napoli defence will play a crucial role if the Italians are to stop the Barcelona front-men from scoring.

(The above story first appeared on LatestLY on Aug 08, 2020 08:55 PM IST. For more news and updates on politics, world, sports, entertainment and lifestyle, log on to our website latestly.com).