Neymar’s only wish since leaving Santos and reaching European shores as a 21-year-old has been to play alongside Messi and eventually inherit his throne as football’s greatest magician. While at Barcelona, he was Messi’s heir and although he left for PSG, Neymar has always been eager to have Messi beside him as a teammate and a friend. 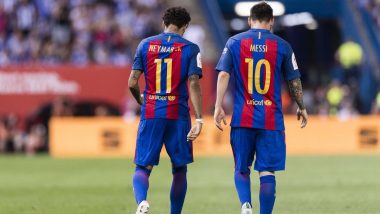 Much has been said and written about Lionel Messi's failed attempt to leave Barcelona in the summer. The Argentina international tried to force a move to Manchester City late in the summer transfer window but was stopped by, what one would call, legal threats. Some 13 months before Messi decided to leave Barcelona, Neymar had attempted to steal a move away from PSG along similar lines. He had not sent had a fax to reveal his intention to leave but had talked enough about Barcelona and Messi to compel the La Liga club to start talks with PSG over a possible deal. It, however, did not materialise. A season has passed since and Neymar remains at Paris Saint-Germain while Messi is still with Barcelona. But for how long? Neymar Has a Lovely Message for Lionel Messi After PSG Finds Out Barcelona As Opponent in UCL Round of 16.

Neymar's only wish since leaving Santos and reaching European shores as a 21-year-old has been to play alongside Messi and eventually inherit his throne as football's greatest magician. While at Barcelona, he was Messi's heir and although he left for PSG after four seasons, Neymar has always been eager to have Messi beside him as a teammate and a friend. Lionel Messi Transfer Update: Football Pundit Daniel Riolo Says, ‘Messi Will Play For PSG.’

"See you soon, my friend," he said in an Instagram post after PSG drew Barcelona as their round of 16 opponents in the UEFA Champions League. This was just two weeks after he had openly suggested PSG could make a move for the Argentinian in the coming summer. "What I want most of all is to play with Messi again, to be able to enjoy him once again on the pitch," Neymar said with a bright smile on his face at the Old Trafford conference room having just virtually sealed PSG's place in the UCL knockouts with a brace against Manchester United.

"I want to play with him next year, for sure. We have to do it next season," he said. This was in a way him telling us Paris Saint-Germain, one of the few clubs who could afford Messi, will make an attempt to sign Messi or perhaps him telling the PSG hierarchy to take advantage of Messi's contract situation at Barcelona and bring him to Parc des Princes. Either way, Neymar reunites with Messi again. This has been all he has ever wanted.

Messi's current contract at Barcelona expires next summer – and unless he is willing to renew it – the 33-year-old can open talks with clubs of his own choice and also sign a pre-contract in four weeks' time. In six months he can sign for one of Barcelona's rivals as a free agent.

A lot of that, however, could depend on the result of the Barcelona vs PSG clash in the last 16, Barcelona are a club in disarray and so PSG start as favoruites. But they were also the favourites when both these teams last met at Camp Nou three seasons ago at the same stage. Only PSG had a 4-0 lead then, and that was the second leg of the UCL 2016-17 last 16. They lost 6-1 that night and 6-5 on aggregate to crash out.

Neymar was the star for Barcelona that night. His brace and the ultimate assist for Sergi Roberto lifting Barcelona to the greatest Champions League comebacks of all-time. This was his moment of arrival like he had suddenly awakened and delivered his full potential. Messi was not Messi by his standards that night while Neymar was above all and played a role in at least four of the six goals that Barcelona put in.

Yet as the season drew to an end, Neymar was linked with a move away. The story was he needed to break away from Messi's shadow to truly stand as a footballing great. Be another of the Ballon d'Or contender. For whatever he did at Barcelona it was always second best to Messi. As so, the move to PSG for a world record fee became real. It was surreal and astonishing but looked like a move that could make him the competitor to Messi. Not be his simple heir and wait for the throne to be empty.

Three seasons have passed since and Neymar is into his fourth with PSG, but it has always seemed he misses Messi and Barcelona. In between his sweet quotes of 'I am happy here' the most Neymar has spoken has been about reuniting with Messi and travelling to the dreamland again.

Come next June, if Neymar and PSG manage to topple Barcelona Messi could be on the flight to Paris. If they fail, Neymar could well be on that same flight perhaps to Barcelona or to join Messi in a new destination.

(The above story first appeared on LatestLY on Dec 15, 2020 07:44 PM IST. For more news and updates on politics, world, sports, entertainment and lifestyle, log on to our website latestly.com).