Belgium vs Russia, UEFA EURO 2020 Live Streaming Online & Match Time in IST: How to Get Live Telecast of BEL vs RUS on TV & Free Football Score Updates in India 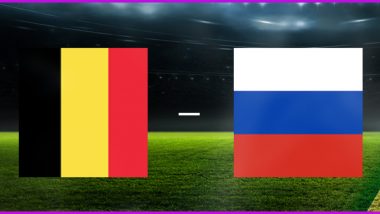 Belgium are the dark horses in pretty much every tournament they take part yet they fail to push on when it matters the most. The Red Devils open their Euro campaign against Russia in St Petersburg in a Group B tie. Under Roberto Martinez, Belgium has evolved into a world class outfit and their recent form has been top notch. They have reached the UEFA Nations League finals and have suffered just a single defeat in their last 13 games. Russia were in the same group as Belgium in the qualifiers and finished behind them with eight wins in ten. Euro 2020 Day 2 Schedule: Today's Match With Kick-Off Time in IST, Upcoming Fixtures and Updated Points Table.

Manchester City’s Kevin de Bruyne is not fit to play against Russia after the talented playmaker went through a minor surgery to fix a eye socket fracture. Belgium usually deploy a 3-4-3 formation with Romelu Lukaku at the top. Eden Hazard continues to struggle with his fitness woes and that means his brother Thorgan could start on the right. Youri Tielemans had a fantastic season with Leicester City in the Premier League and will dominate play in midfield. Leander Dendocnker is likely to be his partner in the middle.

Andrey Mostovoy had to withdraw from the Russian squad after testing positive to the coronavirus. Aleksei Miranchuk and Artem Dyzuba in the attacking midfield role hold the key for Russia and their primary task is to carve out openings for Artem Dyzuba. Yuri Zhirkov despite being 37, has an important role to play on the left wing where his dynamic runs will come into play. UEFA Euro 2020 Points Table Updated.

When is Belgium vs Russia, UEFA EURO 2020 Match? Date, Time and Venue Details

Sony Pictures Networks India is the official broadcaster of UEFA EURO 2020 in India. It will broadcast Belgium vs Russia live match on Sony Ten 2 in English, Sony Ten 3 in Hindi, Sony Ten 4 in Tamil and Telugu, Sony Six in Bengali and Malayalam.

The live online streaming of Belgium vs Russia, UEFA EURO 2020 football match will be available on the SONY LIV app and website. JIO TV users can also catch the live action of the game on its app. Belgium are yet to lose a game to Russia and the kind of form the Red Devils are in, the trend is likely set to continue.

(The above story first appeared on LatestLY on Jun 12, 2021 04:39 PM IST. For more news and updates on politics, world, sports, entertainment and lifestyle, log on to our website latestly.com).