The Qatar World Cup 2022 has seen a few unexpected events within the first four days. Meanwhile, we look back and bring you some of the biggest upsets in FIFA World Cup history. 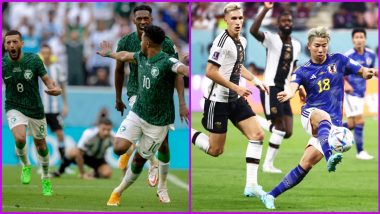 We are just a few days into the FIFA World Cup 2022, and it has been overflowing with action, high goal-scoring matches as England defeats Iran by six goals to two on the second day, the 4-1 victory of France over Australia, and Spain defeating Costa Rica by seven goals to nil. And not to forget major upsets scored by the Asian teams, Saudi Arabia over Argentina and Japan over Germany. Saudi Arabia defeated the South American giants in their first group-stage match and brought an end to their 39-match unbeaten streak. On the fourth day, Japan made history claiming their first-ever victory over Germany. The Qatar World Cup 2022 has seen a few unexpected events within the first four days. Meanwhile, we look back and bring you some of the biggest upsets in FIFA World Cup history. Lionel Messi ‘GOAT’ Funny Memes Trend After Argentina Lose to Saudi Arabia in FIFA World Cup Qatar 2022 Football Match.

#1- USA 1-0 England (1950)- The 1950 Brazil was the first World Cup after World War II, and England were the favourites to win, but the header from Joey Gaetjen in the 38th minute of their second group-stage match led to the defeat. England then lost to Spain in their third match and were knocked out of the competition.

#2- Cameroon 1-0 Argentina (1990)- The 1990 World Cup was where the legend Diego Maradona was defending the title he helped Argentina win four years earlier. Argentina's first match of the tournament against the African side led to one of the biggest upsets. As Francois Omam-Biyik leaped the header into the back of the net over the goalkeeper at 67th minute and won the match one goal to nil.

#3- South Korea 2-1 Italy (2002)- The co-hosts of the 2002 World Cup, South Korea with their home support, passed through the group stage undefeated and went to face Italy in the round of 16. Early in the match, Italy got rid of the zero as Christian Vieri placed the ball in the net but two minutes before the official time South Korea's Seol Ki-Hyeon equalled the score pushing the match into extra time, and on the 117th minute Ahn Jung-Hwan scored the winner. Mind-Blowing! Otter ‘Taiyo’ Had Accurately Predicted Japan’s Stunning Win Over Germany at FIFA World Cup 2022.

#4- South Korea 2-0 Germany (2018)- In Russia, the defending champions Germany came into the competition with high expectations but things took a turn for the worse. They lost their first group stage match against Mexico and after winning their second it was a must-win situation for the Germans in their match against South Korea. Late in the Injury time, South Korea crushed their dreams as Kim Young-gwon and Son Heung-min scored goals on 90+4 and 90+6 minutes, respectively.

#5- Senegal 1-0 France (2002)- Entering the 2002 World Cup, France were the reigning World and European champions, while Senegal was making their debut in the competition. In their first World Cup match, they faced France, and in the 30th minute, Bouba Diop scored a goal and put the African side in the lead and proceeded to defend with their lives. It was the only edition in which Senegal was able to reach the Quarterfinals.

(The above story first appeared on LatestLY on Nov 24, 2022 08:48 PM IST. For more news and updates on politics, world, sports, entertainment and lifestyle, log on to our website latestly.com).