Brazil vs Chile, Copa America 2021 Live Streaming Online & Match Time in IST: How to Get Live Telecast of BRA vs CHI on TV & Free Football Score Updates in India 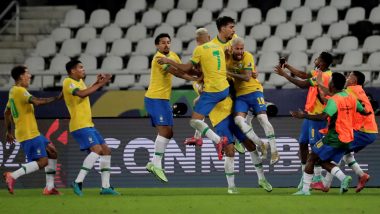 Brazil are the defending champions and have been sensational so far in the competition, winning three of their four games in the competition and finishing at the top of Group B. Meanwhile, Chile have been inconsistent, winning just one of the four games in Group A and made it to the quarter-finals. Brazil will start as the favourites but with the game being a knockout tie any result is possible.

When is Brazil vs Chile, Copa America 2021 Match? Date, Time and Venue Details

The live online streaming of Brazil vs Chile, Copa America 2021 football match will be available on the SonyLiv app and website. Jio will also provide live streaming for its users on Jio TV app. FanCode will also live stream Venezuela vs Peru game but fans need to pay a nominal fee to watch the game.

(The above story first appeared on LatestLY on Jul 02, 2021 05:21 PM IST. For more news and updates on politics, world, sports, entertainment and lifestyle, log on to our website latestly.com).