With 4 defeats to Brazil in their last 5 games, South Korea do not have history favouring them in the contest, but then Brazil’s form makes it quite a contest. Meanwhile, you can find all the information on Brazil vs South Korea (BRA vs KOR) live streaming, match timings in IST (Indian Standard Time), free live telecast and TV channel details in India below. 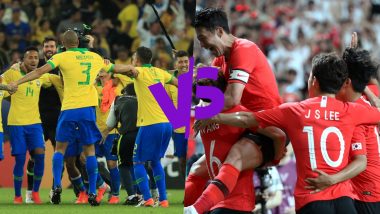 Liverpool midfielder Fabinho who has been in fine form for his club looks set to be inducted in the playing eleven in place of Casemiro. Real Madrid midfielder Casemiro has been involved in a lot of games this season, and there is a feeling he is getting burnt out. Gabriel Jesus was poor against Argentina and should be replaced by Richarlison in attack with Roberto Firmino and Willian for company. Phillipe Coutinho and Arthur must improve their game as they have looked below par off late playing for the national team. How to Watch Brazil vs South Korea International Friendly 2019 Live Streaming Online? Get Free Live Telecast of BRA vs KOR & Football Score Updates on TV in India.

Park Ji-Soo and Hong Chul have pulled out from the South Korean team owing to injuries and will be a massive miss for them. Paulo Bento will likely play a 4-4-2 formation with Tottenham Hotspur midfielder Son Heung-Min will start out wide and will cut inside with every opportunity possible. Hwang Hee-Chan and Hwang Ui-Jo are the two strikers in the team who are known for their terrific pace and mobility. Jung Woo-Yong has the all-important task of tracking the Brazilian runners in the middle to support his defence.

Brazil vs South Korea international friendly 2019 live telecast is not available in the country. There is no official broadcaster to bring BRA vs KOR live action on any television channel in India. Quite heart-breaking news for all the football fans in India!

There are no official broadcaster for Brazil vs South Korea international friendly 2019 match, which means there are no mainstream live streaming options such as Hotstar, Sony Liv app and more. However, one can still get Brazil vs South Korea international friendly 2019 live streaming online in India on GHD Sports App and FanCode. With 4 defeats to Brazil in their last 5 games, South Korea do not have history favouring them in the contest, but then Brazil’s form makes it quite a contest.

(The above story first appeared on LatestLY on Nov 19, 2019 03:52 PM IST. For more news and updates on politics, world, sports, entertainment and lifestyle, log on to our website latestly.com).