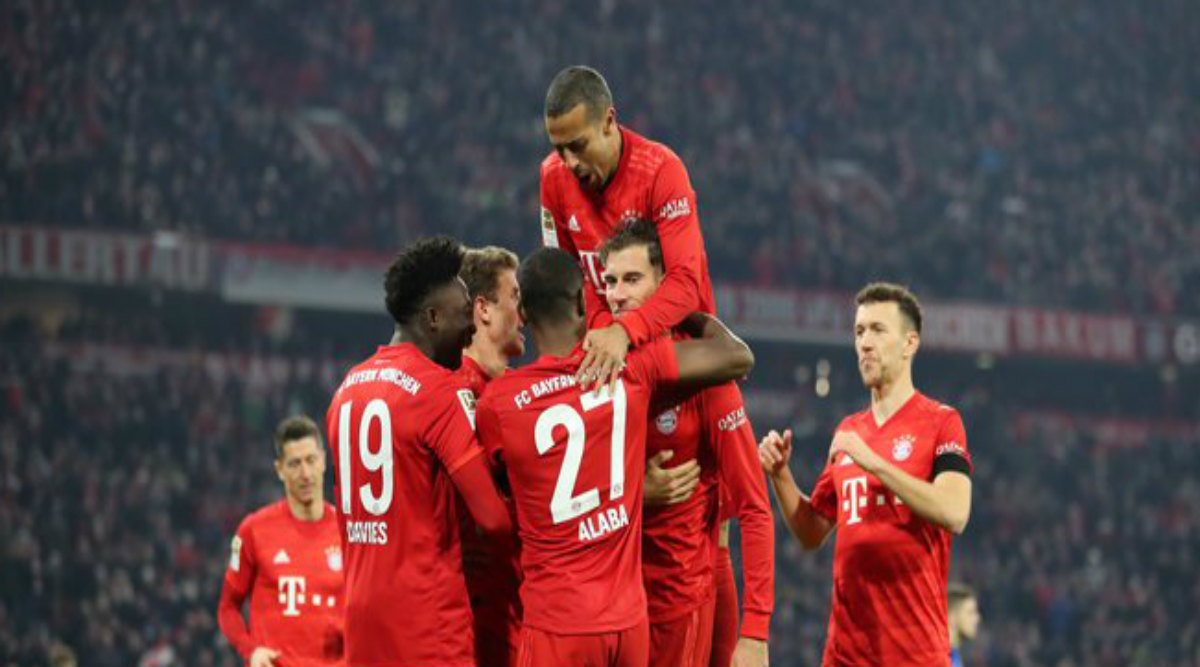 Berlin, January 26: Robert Lewandowski hit his 21st league goal of the season as Bayern Munich thrashed Schalke 5-0 to cut RB Leipzig's lead at the top of the Bundesliga to one point on Saturday.

After Leipzig had crashed to a 2-0 defeat at Eintracht Frankfurt, Bayern seized the chance to trim the advantage with an emphatic win over David Wagner's young Schalke side.

"The Leipzig match beforehand didn't interest me, the main thing is we took three points and had a stability in our game which is very important," said Bayern coach Hansi Flick.

Lewandowski and Thomas Mueller scored first-half goals, then both had efforts disallowed for offside by VAR.

With less than six minutes played, Schalke goalkeeper Markus Schubert failed to deal with a cross and Lewandowski was on hand to hook the ball into the net.

The Polish star moved one clear of Leipzig's Timo Werner at the top of the Bundesliga scoring charts.

Schalke's Welsh forward Rabbi Matondo hit the crossbar soon after, but it was all Bayern after that.

Mueller tapped the ball past Schubert in the six-yard box on 17 minutes, but VAR intervened.

The stadium announcer was already celebrating when replays showed Benjamin Pavard was offside in the build-up as Lewandowski had an effort chalked off.

Bayern and Mueller were not to be denied and the former Germany forward howled with delight when he fired home Goretzka's header two minutes into first-half stoppage time.

It was Mueller's 100th goal at the Allianz Arena.

The hosts came out flying after the break as Goretzka volleyed home against his former club on 50 minutes.

Lewandowski served up a simple tap-in for Alcantara eight minutes later as Schalke offered precious little resistance before Gnabry came on and marked his comeback from injury with a late fifth goal.

"It wasn't fun for us and it wasn't nice, but we'll learn from that," said Wagner.

Leipzig have tough games coming up as they host third-placed Borussia Moenchengladbach next Saturday, then visit Bayern on February 9.

Second-half goals by Almamy Toure and Filip Kostic sealed victory for Frankfurt as Leipzig lost for the first time in 14 games in all competitions.

"We were clearly the better team in the first half, but we were too sloppy with our goalscoring chances," admitted Nagelsmann, who said his team had trained poorly in mid-week.

"When you look at our training on Wednesday, you realise that we are still far from being a top team.

"We're still at the top, but if we want to reach the summit 100 percent (and win the title), we'll have to work hard."

Elsewhere in the title race, Moenchengladbach came from behind to poach a 3-1 home win over Mainz.

Jurgen Klinsmann's Hertha Berlin bounced back from their 4-0 thumping at home to Bayern last Sunday, which left them hovering just above the relegation places, with a 2-1 win at Wolfsburg thanks to goals from Dodi Lukebakio and defender Jordan Torunarigha.

Paderborn moved off the bottom of the table with a 2-0 win at Freiburg, thanks to Christopher Antwi-Adjei's goal and a penalty by Abdelhamid Sabiri.

Union Berlin bounced back from their defeat at Leipzig with a 2-0 home win over Augsburg with goals from defender Neven Subotic and Marcus Ingvartsen.

Borussia Dortmund are fourth after Friday's 5-1 thrashing of Cologne as Norwegian teenager Erling Braut Haaland scored twice off the bench to give him a record five goals in his first two games for the club.