Burnley vs Liverpool match in Premier League 2020-21 will be played at the Turf Moor Stadium in Burnley on May 20 (Wednesday mid-night). The game is scheduled to begin at 12:45 am IST (Indian Standard Time). 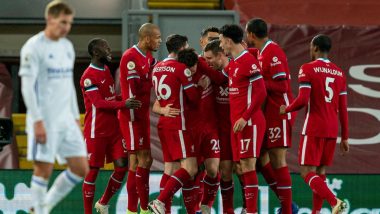 EPL Live Streaming Online in India: Liverpool will be looking to go level on points with fourth placed Leicester City when they take on Burnley in a mid-week encounter. A superior goal difference should see the Reds jump to the Champions League spots with the three points at Turf Moor. Liverpool have been tormented by injuries this season but a decent end to the campaign has seen them climb up the ladder from a despairing position. Opponents Burnley are 16th in league and safe for another season despite flirting with relegation for most parts. They come into the game on the back of two wins in five games and can be a tricky team to face on their home. BUR vs LIV Dream11 Prediction in Premier League 2020–21: Tips to Pick Best Team for Burnley vs Liverpool Football Match.

Bailey Peacock-Farell is set to start in goal for Burnley with Nick Pope not completely fit. James Tarkowski and Ben Mee in defence have the tough task of stopping Liverpool’s dynamic front three. Jack Cork is a versatile midfielder with ability to dictate play from deep in midfield and his presence will free up the likes of Josh Brownhill and Dwight McNeil to attack more. Chris Wood and Ashley Barnes have been the first choice forwards for Sean Dyche and the duo should start again.

Sadio Mane, who is currently not on the best of terms with manager Jurgen Klopp, is set to start for Liverpool. He will link up with Mo Salah and Roberto Firmino in the attacking third to make up a familiar front three for the Reds. Fabinho’s presence in central-midfielder has certainly made the Reds more resolute with Thiago able to dictate the tempo of the team’s passing without having to do much of the defensive work. Alisson Becker’s Stunning Header Against West Brom in EPL 2021, Could Take Liverpool to Champions League.

Burnley vs Liverpool match in Premier League 2020-21 will be played at the Turf Moor Stadium in Burnley on May 20 (Wednesday mid-night). The game is scheduled to begin at 12:45 am IST (Indian Standard Time).

Where to Get Live Telecast of Burnley vs Liverpool, Premier League 2020-21 Football Match?

Fans can watch the live telecast of the Burnley vs Liverpool match on Star Sports channels. Star Network is the official broadcaster of Premier League 2020-21 in India so fans can tune into Star Sports Select 2/HD channels to watch the live-action.

How to Get Free Live Streaming of Burnley vs Liverpool, Premier League 2020-21 Football Match?

Fans in India looking for the live streaming online of the Burnley vs Liverpool match can catch the live action on the Disney+Hotstar app as well as on the website. Fans will, however, have to pay a nominal subscription fee to watch the live streaming. JIO and Airtel users can also watch the match live on the JIO TV and Airtel Xstream apps respectively. With fans set to return to Turf Moor, it will not be easy for Liverpool to dominate the contest. Expect the visitors to claim a narrow 0-1 win.

(The above story first appeared on LatestLY on May 19, 2021 11:05 PM IST. For more news and updates on politics, world, sports, entertainment and lifestyle, log on to our website latestly.com).