Chelsea is leading the race to sign Raphinha from Leeds United this summer as Arsenal's bids have been rejected. It is understood that the price tag will remain around $60-65 million to close deal. Chelsea are now waiting for the player's confirmation as they have already reached an agreement with Leeds United. 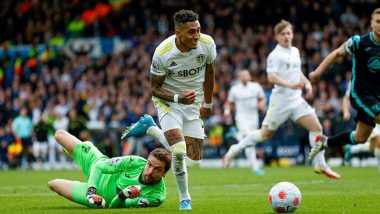 Chelsea are very close to complete Raphinha signing as the Blues have reached an agreement with Leeds United in their latest meeting, according to Fabrizio Romano. It is understood that Chelsea have agreed to pay Leeds' asking price of $60 million for the Brazilian, with the race of the player's signature is still on. The Yorkshire club have reportedly accepted the improved offer of the Blues, and now it all comes down to Raphinha's interest and preference whether he will choose Stamford Bridge as a home for the next season. According to the latest reports, Leeds United rejected an offer from Arsenal who are playing a 'big fish' role in this summer transfer window, with already securing the important signings like Gabriel Jesus and Fabio Vieira. Ousmane Dembele Transfer News: Chelsea Target Waiting For Improved Offer From Barcelona.

After an impressive season at Elland Road, many big clubs such as Barcelona, Atletico Madrid, Chelsea and Arsenal have shown interest in getting Raphinha this summer. He played a vital role in Leeds United's stay in the top flight of English football for next season as he netted 11 goals and assisted three times after his arrival at England from Stade Rennais in 2020. He has not only impressed the English fans but also has secured a concrete place in the Brazil national team with his magical playing display which has already impressed the Samba coach, Tite.

Both Chelsea and Arsenal were in a bidding war for the attacker with the latter putting several bids on the table in the last few weeks. Leeds United rejected the Gunners' offers every time as those bids did not meet the requirements of the Raphinha deal.

However, Chelsea is the only club that has found a breakthrough in talks with the Yorkshire club for the Brazilian's deal as the Blues have agreed to meet the satisfactory price tag, Fabrizio Romano reports.

It is understood and the deal is just a few days away from finalization as Chelsea now only need a confirmation from the player regarding the deal. However, the whole situation can be changed if the player rejects the Blues and prefers any other club for his next club.

(The above story first appeared on LatestLY on Jun 29, 2022 09:47 AM IST. For more news and updates on politics, world, sports, entertainment and lifestyle, log on to our website latestly.com).