Despite not being in the best of forms, Chelsea have enough talent to brush aside Burley at Stamford Bridge which is always a difficult place to visit for the opponents. 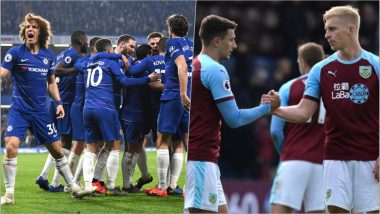 Manchester United. Arsenal and Tottenham Hotspur’s loss in the Premier League has put the spotlight on Chelsea as the race for top 4 heats up between these four clubs. The Blues are at home to Burnley who have won their last three games. Manager Maurizio Sarri has been linked with a move away from the Stamford Bridge following the defeat against Liverpool, but with some big games coming up, the Italian has his sight set on finishing the season strongly. If they make it to Europe next season, it may save Sarri from the axe. Check out Chelsea vs Burnley FC free live telecast, TV channels in India, start time, live streaming online details below. Chelsea vs Burnley - English Premier League, 2018-19, Match 353 - Live Football Score Updates.

German defender Antonio Rudiger is out of the contest with a knee injury paving the way for Danish international Andreas Christensen to start at the back along with David Luiz. Italian midfielder Jorginho was rested for the Europa League game and will be part of the playing eleven against Burnley. There is a lot of speculation regarding the future of Eden Hazard, but for now, the Belgian skipper will want to do what he does best on the pitch- destroy the opposition defence. He will have Pedro and Gonzalo Higuain in attack to complete a strong attacking trio.

Former England players Aaron Lennon and Peter Crouch are out of the Chelsea game while Phil Bardsley may be named in the squad if he passes a late fitness test. Two-goal hero in the Cardiff Game, Chris Wood could have a real impact against the Blues and will line-up alongside Ashley Barnes. Jack Cork will have a real test in Eden Hazard, and the defensive midfielder needs to mark his illustrious opponent well throughout the 90 minutes. Ashley Westwood is more attack-minded and his link-up play with the strikers is crucial from Burnley’s point of view.

Chelsea vs Burnley FC, English Premier League, 2018-19, Match 353 will be held on April 22 with the kick off time being 12.30am IST (Tuesday). The match between fifth-placed Chelsea and 15th-ranked Burnley FC is taking place at Stamford Bridge.

Where to Watch the Live Telecast of Chelsea vs Burnley FC, EPL 2018-19 Football Match?

How to Watch the Free Live Streaming Online and Football Score Updates of Chelsea vs Burnley FC, EPL 2018-19 Football Match?

If you are looking where you can watch the online streaming of the match, then you can log on to Star Sports' live streaming service, i.e. Hotstar. You can also catch Chelsea vs Burnley FC live football score updates on LatestLY, by clicking here. Despite not being in the best of forms, Chelsea have enough talent to brush aside Burley at Stamford Bridge which is always a difficult place to visit for the opponents.

(The above story first appeared on LatestLY on Apr 22, 2019 10:35 PM IST. For more news and updates on politics, world, sports, entertainment and lifestyle, log on to our website latestly.com).