Talking about the game, Manchester United dominated the possession by having the ball 57 per cent of the time and the rest was handled by the home team. Man United took 13 shots out of which five of them ended up being on target whereas the home team took 18 shots. 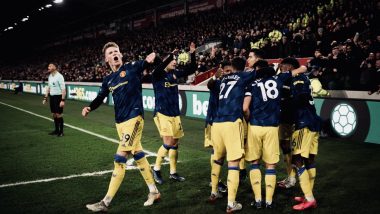 Manchester United locked horns with Brentford to register a 3-1 win and grab those three important points in the EPL 2021-22 at the Brentford Community Stadium. After winning the game the players like Cristiano Ronaldo, David de Gea, Mason Greenwood, Bruno Fernandes took to social media and posted tweets about the same. The players hailed the team for their performance and said that this was quite an important win. Anthony Elanga, Mason Greenwood and Marcus Rashford were the goal scorers for the team. Cristiano Ronaldo Fumes at Ralf Rangnick After Being Subbed During Brentford vs Manchester United in EPL 2021-22 (Watch Video).

A victory in the Capital. 🔴 pic.twitter.com/WmIpzWcBc8

Away support amazing tonight, thank you ! 😍

Great to be back on the winning track. Same attitude on Saturday. Let’s go! pic.twitter.com/0dTtF1xDLx

The team is now placed on number seven of the EPL 2021-22 points table. Manchester United now has 35 points in their kitty. The team has won 10 games out of 21.

(The above story first appeared on LatestLY on Jan 20, 2022 02:49 PM IST. For more news and updates on politics, world, sports, entertainment and lifestyle, log on to our website latestly.com).