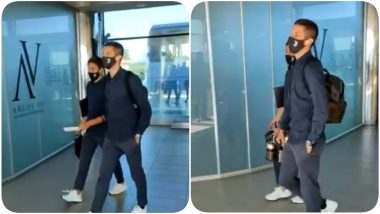 After ending their last match with a win against Lazio, team Juventus leaves for the game against Udinese. The match will be held at 11.00 pm IST at the Dacia Arena and the team will be looking forward to winning this game and inch closer to winning the Serie 2019-20 title. Cristiano Ronaldo, Paulo Dybala and the team have left for Udinese and the official account of Juventus has shared the video of the players leaving for the game. The Old Lady stands on number one of the Serie A 2019-20 points table with 80 points. Juventus Declares 23-Member Squad for Serie A 2019-20 Match Against Udinese, Fans Want Cristiano Ronaldo to Score a Hat-Trick.

Juventus enters the game with a win against Lazio with Ronaldo scoring a brace. With this, became the only player to score 50 goals in EPL, Serie A and La Liga. On one hand, where Bianconeri enters the game with a win, Udinese who is placed on number 16 pf the Serie A 2019-20 point had lost their last game to Napoli by 2-1. For now, let's have a look at the video shared by Juventus.

The team had also declared their 23-member squad for the match and the shared the same on social media. The fans are eager to watch the game and are rooting for Ronaldo to score a hat-trick against the opponents. Out of Juventus' last 15 outings against Udinese, the team has won 14 games and have a very strong head-to-head record on Juventus.  Juventus has won all their last five games against Udinese. Ronaldo and Dybala will be the players to watch out for.

(The above story first appeared on LatestLY on Jul 23, 2020 05:00 PM IST. For more news and updates on politics, world, sports, entertainment and lifestyle, log on to our website latestly.com).