Cristiano Ronaldo Shares Picture With Serie A Trophy, Says ‘It's Not a Bad Habit’ After Clinching His Second League Title in Italy 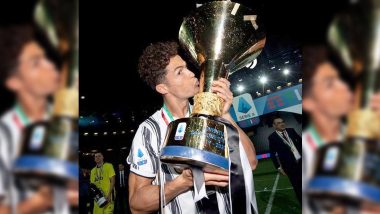 Cristiano Ronaldo added one more title to his trophy cabinet after winning the Serie A 2019-20 with Juventus. Ronaldo, who was rested for the final league fixture against AS Roma, couldn’t have a fairy-tale end but consecutive Serie A league titles in two seasons in Italy will make the Portuguese proud. He is already in the elite list of players to win at least two leagues titles in England, Spain and Italian top-flight. Juventus lost their final match to Roma 1-3 with Ronaldo and Paulo Dybala on the stands. Cristiano Ronaldo Adds Bugatti Centodieci to His Car Collection to Celebrate Juventus’ Serie A 2019–20 Title Win.

Ronaldo also failed to beat Lazio forward Ciro Immobile to the ‘Capocannoniere’ trophy, awarded to the highest goalscorer in each Serie A season. The 35-year-old ended the campaign on 31 goals, five goals behind Immobile who also won the European Golden Shoe for the first time in his career. Immobile, who netted 36 times in as many games in Serie A 2019-20, also equalled Gonzalo Higuain’s record of most goals in a single Serie A campaign. Cristiano Ronaldo-Marcelo, PV Sindhu-Carolina Marin, Roger Federer-Rafael Nadal, 5 Real-Life Friendships in Sports.

Higuain had scored 36 goals for Napoli in 2015-16, which was the all-time record for Italian top-flight in a single season. Immobile netted against Napoli to equal that record although Lazio were beaten 3-1 by Gennaro Gattuso’s side. Ronaldo, however, won what Immobile couldn’t – the Serie A title.

This was the 32nd trophy for Ronaldo in his 17-year career and second Serie A trophy in his cabinet. “One more! It’s not a bad habit,” the Portuguese captioned the picture of himself standing with the league trophy.

(The above story first appeared on LatestLY on Aug 02, 2020 03:50 PM IST. For more news and updates on politics, world, sports, entertainment and lifestyle, log on to our website latestly.com).