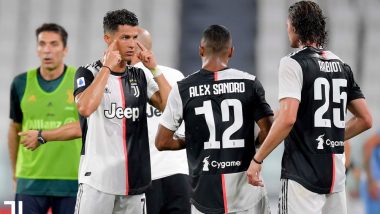 Cristiano Ronaldo and team will be hosted by Udinese later today for the Serie A 2019-20. As the team inches closer to winning their ninth Serie A title win, Ronaldo and his team are completely focused on their upcoming game as they are inching glory. Juventus shared the picture of Cristiano Ronaldo staying focussed on the upcoming game. The team is looking to continue with their winning streak as they won their last game against Lazio by 2-1 with Cristiano Ronaldo scoring a brace and becoming the only player to net 50 goals in Serie A, EPL and La Liga. Cristiano Ronaldo Gifts Jersey to 17-Year-Old Lazio Player Raul Moro Whose 'Awestruck Reaction' While Looking at CR7 Went Viral.

He also became the fastest player to reach the 50-goal mark in the Italian League. With this, he even scored 30 goals in the Italian League this season and currently shares the spot of top goal scorer in Serie A 2019-20 with Lazio's Ciro Immobile. Juventus shared the picture of Ronaldo on social media as they take on Udinese later tonight. Check out the post below:

With these kinds of records, even Maurizio Sarri praised the five-time Ballon d'Or winner and labelled him extraordinary. He said when CR7 smells blood he is extraordinary. Ronaldo also reacted after the record and said that individual records are important but the team winning is much more important. The match will be played at 11.00 pm IST.

(The above story first appeared on LatestLY on Jul 23, 2020 11:48 AM IST. For more news and updates on politics, world, sports, entertainment and lifestyle, log on to our website latestly.com).

Comments
Tags:
Juventus Maurizio Sarri Serie A Serie A 2019-20 Udinese Udinese vs Juventus
Comments
You might also like