With title hope in the English Premier League (EPL) all but killed following the 1-2 defeat to United in Manchester derby on the weekend, Manchester City will hope to end its campaign in the group stages of 2019-20 UEFA Champions League unbeaten and at the top of Group C. The latter they are assured of, but City must beat Zagreb to finish unscathed. 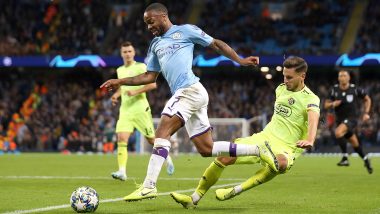 While Man City have already qualified for the Champions League knockout, Dinamo Zagreb, who have won once and lost and drawn twice each, are placed third in Group C. Nenad Bjelica’s side find themselves a point behind Shakhtar Donetsk, with one match remaining. The Croatian began their UCL 2019-20 campaign with a thrashing 4-0 win over Atalanta but have since then lost 0-2 to Man City and played 5-goal all draw across two matches with Shakhtar. Dinamo Zagreb will miss striker Sandro Kulenovic for the City clash. Kulenovic will not be available until next January and is out with a broken foot. Premier League 2019-20: Manchester United Win Battle of Manchester City Marred By Alleged Racism.

For City, John Stones added to their defensive injury woes and has not travelled with the squad to Croatia. Stokes limped out in the 1-2 derby defeat to Manchester United in the league leaving City with little time to play two new centre-backs for the UCL Group C match against Zagreb. Fernandinho is also suspended for the match and City have called up young centre-backs Eric Garcia and Taylor Harwood-Bellis for the match.

Dinamo Zagreb vs Manchester City match in 2019-20 UEFA Champions League will be played on December 11, 2019 (Wednesday). DIZ vs MCI Group C UCL encounter in will take place at the Stadion Maksimir National Stadium in Croatia and is scheduled to start at 11:25 pm IST (Indian Standard Time).

Manchester City are assured of a top finish for the third successive time in UEFA Champions League. They are unbeaten in Group C and will not only want to end the group stages of 2019-20 UCL unbeaten but also complete the double over Dinamo Zagreb. The Croatian outfit, on the other, have only beaten English sides only once in five meetings. That was a 2-1 victory over Arsenal at home. A similar score-line against City will be a big outcome.

(The above story first appeared on LatestLY on Dec 11, 2019 07:00 PM IST. For more news and updates on politics, world, sports, entertainment and lifestyle, log on to our website latestly.com).