Manchester United could be left without a striker for their trip to St James Park with both Anthony Martial and Edinson Cavani unavailable. With Martial serving his three-match suspension, Cavani was supposed to make his debut against Newcastle United but UK's quarantine protocols suggest he might not be available. 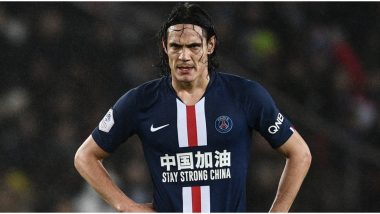 Manchester United will be without their new deadline day signing Edison Cavani when they resume their Premier League campaign after a week of international break. United, who started the new season with two defeats in three games will resume their campaign on October 17 with a trip to St James Park. Ole Gunnar Solskjaer’s side will also be without their first-choice striker Anthony Martial, who is serving a three-match suspension after his red card against Tottenham Hotspur, leaving the Red Devils without a central striker for their away match against Newcastle United. Manchester United Contact Mauricio Pochettino Over Replacing Ole Gunnar Solskjaer As the Head Coach After 6–1 Humiliation Against Tottenham Hotspur.

United were hoping to play Cavani against Newcastle but reports suggest they might have to do without him due to quarantine protocols in the UK. The government regulations for COVID-19 protocols clearly state that anyone arriving from France must self-isolate for at least 14 days. Athletes have been given exemption only if they have been under a bio-secure bubble in a previous club. Manchester City’s Twitter Account Mysteriously Disappears, Restored Minutes Later but With Decreased Followers; Fans Troll Club.

But Cavani, who joined the Red Devils on Monday, left Paris Saint-Germain in June and has not been part of any bio bubble since. The 33-year-old striker, therefore, has to go into self-isolation for a fortnight before he can make his debut for the club. According to The Times, Manchester United are seeking clarification on Cavani’s possible quarantine from the FA and the Premier League. If he has to be in self-isolation for 14 days, the Uruguayan will miss next week’s trip to St James Park.

The 33-year-old then will be in contention to make his debut against his former club Pairs Saint-Germain at Parc des Princes on October 20. Cavani’s 14-day isolation is set to end on October 18 making him available for the trip to France. Cavani could also then play in the Premier League against Chelsea four days later.

(The above story first appeared on LatestLY on Oct 07, 2020 06:53 PM IST. For more news and updates on politics, world, sports, entertainment and lifestyle, log on to our website latestly.com).