Initially, it was thought that perhaps the City's Twitter account had been hacked and the page has been deleted. But once confirmation dropped in that the page was not hacked, reports emerged that it was suspended by Twitter for carrying a huge number of fake followers. Fans immediately took to Twitter to troll the club. 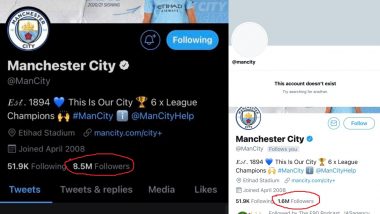 Manchester City’s Twitter account was reportedly suspended for carrying a larger number of fake Twitter accounts followers. City, who in the past have been accused of buying followers, were accused of having a large number of bot followers on Twitter leading to the alleged suspension of its Twitter account. Fans of rival clubs immediately flocked on Twitter to troll the Cityzens after reports emerged that the Premier League football club’s official Twitter account was suspended for carrying a large number of fake followers. Cristiano Ronaldo Tops List of 'Most Dangerous Celebrities to Search Online' in India, CR7's Net Worth, Earnings Among Searches That Lead Users to Harmful Links: McAfee Report.

Initially, it was thought that perhaps the Twitter account had been hacked and the page has been deleted. But once confirmation dropped in that the page was not hacked, reports emerged that it was suspended by Twitter for carrying a huge number of fake followers. Fans immediately took to Twitter to troll the club. Some fans suggested that perhaps Twitter was showing the UEFA and FA boards on how the club can be banned by taking a dig at them for overturning the two-year Champions League ban. Mohamed Salah Wins LFC Goal of the Month Award For His Strike Against Leeds United (Watch Video).

ManCity got suspended because you’ve to be older than 13 to use Twitter. pic.twitter.com/5rV7T0CBF6

Man City getting banned on Twitter for buying followers, peak 😂

City’s Twitter account was later restored but the followers shockingly decreased from 8.5M (before the account mysteriously disappeared) to 1.6 million followers after it was restored. The club is yet to issue anything official on the mysterious deletion on its Twitter page as well as on the sudden decrease in the number of followers.

Manchester City appear to have lost almost 7 million Twitter followers since the account was disabled for a few hours this morning. Strange affair. Hopefully they’ll all be able come bounding back soon. pic.twitter.com/hq8ev3WJ0g

City have been in the past accused of carrying a large chunk of fake followers. An Edinburg based agency, Pilot Fish Media had last year reported that about 30% of City’s Twitter followers and more than 50% of the club’s Instagram page followers were fake.

The club’s twitter account have been restored now and they even responded to the mysterious disappearance with a cheeky meme. City will resume their Premier League campaign on October 17 (Saturday) after a two-week international break with a big home match against Arsenal.

(The above story first appeared on LatestLY on Oct 07, 2020 05:51 PM IST. For more news and updates on politics, world, sports, entertainment and lifestyle, log on to our website latestly.com).