Egypt Squad for 2018 FIFA World Cup in Russia: Lineup, Team Details, Road to Qualification & Players to Watch Out for in Football WC

Egypt are placed in Group A along with Uruguay, Russia and Saudi Arabia. 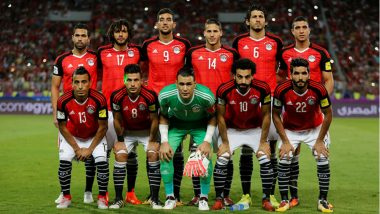 Egypt’s foray into the 2018 FIFA World Cup is the ultimate football romance one can come across with the African side making it to a World Cup after a gap of 28 years. Having waited decades for the footballing gods to show mercy on their team, the Egyptians can now look forward to their beautiful dream turning into a reality in Russia. Coach Hector Cuper’s appointment in 2015 could be seen as a stepping stone towards this brilliant achievement by this side as the Argentine tactician changed the fortunes of this team. A final in the 2017 African Cup of Nations was followed by an even bigger achievement in World Cup qualification. Egypt has announced 29-man world cup squad with star player Mohamed Salah headlining the team lineup news. FIFA World Cup 2018 Schedule in IST for PDF Download: Fixtures, Groups, Time Table with Match Timings & Venue Details of Football WC in Russia.

Egypt will have goalkeeper Essam El-Hadary compete at finals at the age of 45 making him the oldest to do so. West Bromwich Albion duo of Ahmed Hegazy and Ali Jabr are in contention for the starting eleven in the heart of the defense while veterans Ahmed Fathy and Mohamed Abdel-Shafy ready to accompany them on the flanks. Arsenal’s young talent Mohamed Elneny will be in charge of the midfield, and his partnership with Abdullah Said will be extremely important.

The strike department is led by Egypt’s hero Mohamed Salah who has been in the form of his life with Liverpool scoring more than 40 goals and winning several accolades. He is some sort of demi-god back home and will find great support in Russia.

Egypt topped Group E of the CAF FIFA World Cup 2018 qualifiers securing 13 points to book a world cup berth. The Egyptians won 4 out of the 6 matches they played with Mohamed Salah grabbing 5 goals in the qualifiers. They had earlier dispatched Chad 4-1 in the Round 2 of the CAF qualifiers to advance to the final qualification phase.

Performance in the 2014 World Cup

Mohamed Salah: To say that Mo Salah is vital to Egypt will be some sort of understatement as the Liverpool striker is much more than a player. He is someone that fans love and teammates rely heavily upon to find a way for them. He was the leading scorer in the African qualifiers with 5 goals and with him around, Egypt should be confident to find the back of the net.

Mohamed Elneny: He has had his critics in EPL when he turns up for Arsenal, but there is no denying the vast potential this midfielder has. The more he stays high up the pitch, the better the chances of Egypt dominating the game.

Egypt are placed in Group A along with Uruguay, Russia and Saudi Arabia. They will kick off their world cup 2018 campaign facing Uruguay on June 15 followed by a match against Russia on June 19 and take on Saudi Arabia on June 25. Before the main event, Egypt will play as many as three friendly games first against Kuwait on May 26, Colombia on June 1 and Belgium on June 6.

(The above story first appeared on LatestLY on May 21, 2018 05:34 PM IST. For more news and updates on politics, world, sports, entertainment and lifestyle, log on to our website latestly.com).