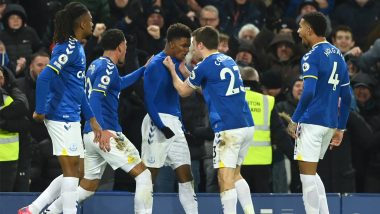 London, Dec 24: Everton's Boxing Day match at Burnley has been postponed due to Covid-19 cases and injuries in the club, the Premier League announced on Friday. Everton had made an initial request to postpone the game however, it was rejected despite head coach Rafael Benitez claiming he only had nine fit players for the match. Everton on Friday confirmed the development, saying, "Our Premier League fixture at Burnley on Boxing Day has been postponed due to the number of Covid-19 cases and injuries in our squad." Liverpool vs Leeds, Wolves vs Watford EPL 2021-22 Games on Boxing Day Postponed Due to COVID-19 Cases.

"The club will not be able to fulfil their fixture this weekend as a result of an insufficient number of players available to play due to Covid-19 cases and injuries."

Benitez said on Thursday that he was "surprised" the game had been expected to go ahead, after two matches -- Liverpool v Leeds and Wolves v Watford -- were postponed due to Covid cases.

Liverpool's clash with Leeds and Watford's trip to Wolves, also scheduled for Sunday, had already been postponed due to coronavirus outbreak. A total of 13 matches have now been called off in the past two weeks as Britain battles record numbers of positive Covid cases due to the Omicron variant of the virus.

(The above story first appeared on LatestLY on Dec 24, 2021 10:11 PM IST. For more news and updates on politics, world, sports, entertainment and lifestyle, log on to our website latestly.com).