Euro 2020: From Ruben Dias to Matthijs De Ligt, Here Are the Three Defenders To Watch Out For

Almost all discussion around top players circulate around strikers and midfielders but there's hardly is any discussion around defenders. Oftentimes, their rock-solid presence at the back decides the outcome of a match and with Euro 2020 fast approaching, let us take a look at three such defenders who are to be watched out for. 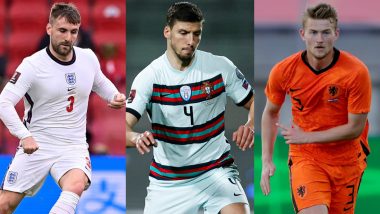 Defense, although underrated, forms a very core part of a footballing unit and is very instrumental in determining the success of teams. Almost all discussion around top players circulate around strikers and midfielders but there's hardly is any talk around defenders. Oftentimes, their rock-solid presence at the back decides the outcome of a match and with Euro 2020 fast approaching, there would indeed be a lot of very talented defenders who would want to replicate their club-level successes with their national teams. Let us take a look at three such defenders, who are the ones to watch out for in the forthcoming European competition: Euro 2020: From Kevin de Bruyne to Bruno Fernandes, Check Three Midfielders To Watch Out for

1) Ruben Dias: This is a name that had to be on this list. A reported 62 million euros brought him from Benfica to Manchester City and then, everything he did was history. He was one of Pep Guardiola's key performers in their Premier League title triumph this year and his splendid performances led him to being picked as the Premier League Player of the Year in his very first season in England. His presence at the back drastically improved City's defensive setup and he would undoubtedly be a very crucial player for Portugal, if they choose to retain their European championship title.

2) Luke Shaw: The English left-back is finally living off his promise that he had initially shown when he was bought by Manchester United in the Premier League in 2014. A horrendous injury followed but he is back to his best. Shaw has been one of United's best performers of the season, playing a crucial role in them finishing second behind local rivals Manchester City in the Premier League and a run to the Champions League final, where they were beaten by Villarreal.  As a matter of fact, Shaw's performance made the coach start him in most matches, thus relegating new signing Alex Telles to the bench. He was also named in the Premier League Team of the Year and was Manchester United's best player this season. He might not be preferred over Chelsea's Ben Chilwell by English coach Gareth Southgate but given an opportunity, he can pack a punch or two with his marauding runs in the left flank and rock-solid defensive capabilities. He is undoubtedly one of the defenders to watch out for in Euro 2020. He

3) Matthijs De Ligt: The Dutch defender, who was touted to be one of the best in the game today, failed to make that sort of an impact he had as an Ajax player, after he signed for Juventus two years ago. Despite underwhelming performances, the young defender would be ready to prove a point or two when he would be one of the leaders in the Dutch defense, with Virgil Van Dijk missing the tournament due to an injury. He too would be raring to go and replicate his form, which had helped Ajax reach the semi-finals of the Champions League in 2019. He is one of those defenders who is to be watched out for, in Euro 2020.

(The above story first appeared on LatestLY on Jun 09, 2021 08:37 PM IST. For more news and updates on politics, world, sports, entertainment and lifestyle, log on to our website latestly.com).