There has been a lot of talk in the ongoing transfer window about the World Cup-winning French midfielder returning to Diego Simeone's side with midfielder Saul Niguez joining Barcelona. 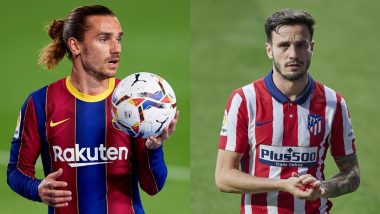 There has been a lot of rumours of late about Barcelona and Atletico Madrid agreeing a player swap deal involving Antoine Griezmann and Saul Niguez and responding to all of that, Atletico president Enrique Cerezo said that 'everything is possible'. This would excite Atletico fans who would then be seeing their star player return in the red and white jersey, two years after he left to join the Catalan giants. Despite this admission that things like this can be possible, he cleared out that he hasn't heard about such a deal being discussed between the two clubs. Barcelona Unveil Away Kit For 2021-22 Footballing Season (See Post)

Atletico Madrid famously won the La Liga title last season on the final day of  and have been relatively quiet in the transfer market so far. They have nonetheless acquired the services of Rodrigo De Paul from Udinese after the Argentine had a brilliant Copa America with Argentina. A Griezmann-Saul swap deal has been a talking point for some time now in the transfer market and Cerezo said, "I have no idea, they haven't told me anything, I don't know anything. I do not know how the negotiations are, not even if there are any, but there is time left for you to know what is going to happen. In the world of football everything is possible but in the Griezmann's case I have no idea, nor have I asked."

If the transfer materialises, Saul would then move out of Madrid amidst lots of rumours linking him to Premier League heavyweights Manchester United and Liverpool. As a matter of fact, Saul could head towards a potential Atletico Madrid exit with his agent claiming that there are "many options" to consider in the summer.  "A lot of people will ask about all the players, as always, but in this case I don't know if Liverpool has acted. We do have a technical service that deals with this very well and will be aware of everything," Cerezo said about the Spanish midfielder's situation.

He was however clear about Joao Felix's future at the club, dismissing all possible rumours about the Portuguese international leaving the Spanish champions. "Joao is an Atletico Madrid player, has a long-term contract and is one of the leading figures in European football," he said.

(The above story first appeared on LatestLY on Jul 19, 2021 10:13 PM IST. For more news and updates on politics, world, sports, entertainment and lifestyle, log on to our website latestly.com).