NorthEast United are currently on a winless run of five games, while FC Goa’s run of four successive wins ended in the 1-2 defeat to defending champions Bengaluru FC. It needed a Manvir Singh header in extra-time for a 10-man FC Goa to steal a point off NorthEast United with the game ending in 2-2 draw after NorthEast had led from being a goal down. 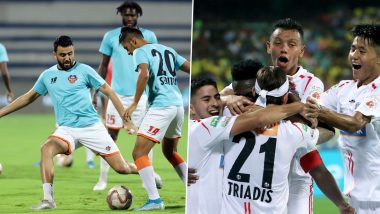 FC Goa will aim for the top spot when they face a struggling NorthEast United in Indian Super League (ISL) 2019-20 at the Fatorda Stadium. FC Goa vs NorthEast United clash in ISL 6 will take place on January 08, 2019 (Wednesday). FC Goa are currently tied on points (21) with leaders ATK but are second on goal difference and have an opportunity to go on top in the standings with a win over NorthEast United at home. The game ended in 2-2 draw when both these teams met earlier in ISL 6. In head-to-head records, FC Goa and NorthEast United have met each other 11 times with 5 games ending in draws while Goa have won 5 and NorthEast 2 matches. The highlanders have, however, never beaten Goa away from home with the Gaurs also unbeaten in last 4 encounters between these sides. Take a look at results of the last 5 FCG vs NEUFC matches in ISL. FC Goa Vs NorthEast United FC - Live Football Score.

NorthEast United are currently on a winless run of five games – two of which have ended in thrashing defeats – while FC Goa’s run of four successive wins ended in the 1-2 defeat to defending champions Bengaluru FC. It needed a Manvir Singh header in extra-time for a 10-man FC Goa to steal a point off NorthEast United with the game ending in 2-2 draw after NorthEast had led from being a goal down. FC Goa vs NorthEast United FC Dream11 Team Prediction.

Interestingly, it was the fifth draw in 11 meetings between these teams but no match has seen a goalless draw. Those 11 matches have produced 37 goals with FC Goa alone netting 22 times. Ahead of the 12th meeting between FC Goa and NorthEast United, take a look at the results of their last 5 encounters.

Hugo Boumous gave FC Goa the lead post the half-hour mark but Asamoah Gyan levelled for the home team in the second-half and Redeem Tlang put NorthEast United ahead with 15 minutes remaining. A fierce and intense encounter suddenly turned violent resulting in Seminlen Doungel’s red card and warnings for Kai Heerings and Boumous. But Manvir Singh grabbed the headlines with an injury-time header to snatch a point from the cusp of defeat for the visitors. All three mentioned were later banned for three games each.

NorthEast United took a beating with four different players netting for the home team. All six goals came in the second hald with Ferran Corominas scoring a brace and Edu Bedia, Boumous and Miguel Fernandez scoring the other three for Goa. Bartholomew Ogbeche scored a consolation for NorthEast.

Corominas had his scoring boots again and he put Goa ahead with a double in 28 minutes after Federico Gallego had scored for the Highlander inside the opening 8 minutes. Ogbeche levelled the scores for NorthEast in the second-half.

NorthEast United’s last victory against FC Goa came in this match. The first of four matches between NorthEast United and FC Goa in 2018. This was also when Seminlen Doungel played for NorthEast United. He scored the winner for the Highlanders after Manuel Arana had cancelled Marcinho’s 21st-minute strike.

FC Goa are placed 2nd in the points table in ISL 2019-20 and can climb to top with a victory. NorthEast United are third from the bottom among 10 teams and only have 11 points from 9 games. They are also winless since November and will hope to start the New Year with a victory. FC Goa lost to Bengaluru FC in their previous match, while NorthEast United were held to 1-1 draw by Kerala Blasters.

(The above story first appeared on LatestLY on Jan 08, 2020 01:00 PM IST. For more news and updates on politics, world, sports, entertainment and lifestyle, log on to our website latestly.com).