Gerard Pique, Sergi Roberto, Ronald Araujo, Samuel Umtiti and Ansu Fati are all missing for Barcelona. Sergino Dest has recovered from a knock and is in line to occupy the right-back spot for the Catalonians. Lionel Messi, Phillipe Coutinho and Marc-Andre Ter Stegen have been rested. 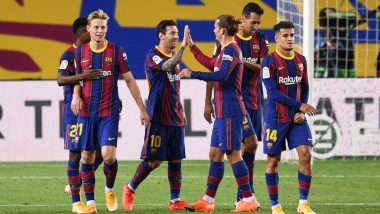 Barcelona have maintained a perfect record in Europe so far with four wins in as many games. The Catalonians may have had their fair share of trouble in domestic football but Europe certainly has been good to them in terms of results and the brand of football associated with an iconic club like them. They travel to the Puskas Stadium in Budapest next to face Ferencvaros in their penultimate game of the 2020-21 UEFA Champions League. Finishing top of the group remains a priority for manager Ronald Koeman though he may opt for squad rotation. Ferencvaros have 1 point to show so far and have been poor throughout the campaign. Ferencvaros versus Barcelona will be telecasted on Sony Ten network and streamed on Hotstar from 1:30 am IST. Lionel Messi Left Out of Barcelona Squad For UEFA Champions League 2020-21 Match Against Ferencvaros.

Eldar Civic is highly unlikely to feature for Ferencvaros tonight as the left-back struggles with fitness issues. Apart from the Bosnian, manager Serhiy Rebrov has everyone available for selection. The hosts will line up in a 4-3-3 formation with Franck Boli playing as the striker. He will be flanked by Tokmac Nguen and Oleksandr Zubkov. Ihor Kharatin will be tasked with providing stability in midfield and stay resolute against Barcelona’s cutting edge passing. Lionel Messi & Antoine Griezmann Squash Rift Rumours, Connect Play Upto 26 Times During Barcelona vs Osasuna, La Liga 2020-21.

Gerard Pique, Sergi Roberto, Ronald Araujo, Samuel Umtiti and Ansu Fati are all missing for Barcelona. Sergino Dest has recovered from a knock and is in line to occupy the right-back spot for the Catalonians. Lionel Messi, Phillipe Coutinho and Marc-Andre Ter Stegen have been rested and the likes of Miralem Pjanic and Carles Alena should start. Martin Brathwaite plays as the forward for the visitors with Pedri slotting in as the no 10.

Ferencvaros vs Barcelona UEFA Champions League Group G match will be played on December 3, 2020 (Wednesday midnight). The UCL match will take place at Puskas Arena and it is scheduled to start at 01:30 am IST (Indian Standard Time).

Fans in India can enjoy the live telecast of Ferencvaros vs Barcelona UCL match on Sony Sports Channels. Sony Sports is the official broadcaster for UEFA Champions League 2020-21 in India. Fans can catch the live-action of the Group D match live on Sony Ten SD and HD channels.

Where to Get Free Live Streaming Online of Ferencvaros vs Barcelona UEFA Champions League 2020-21 Football Match?

Those unable to follow the Group G UCL match live on television can also catch the match live online. SonyLiv will be live streaming the Ferencvaros vs Barcelona UEFA Champions League 2020-21 match online for its fans in India. Despite playing a second string team, Barcelona are miles ahead of Ferencvaros in terms of quality and should win the game.

(The above story first appeared on LatestLY on Dec 02, 2020 04:03 PM IST. For more news and updates on politics, world, sports, entertainment and lifestyle, log on to our website latestly.com).