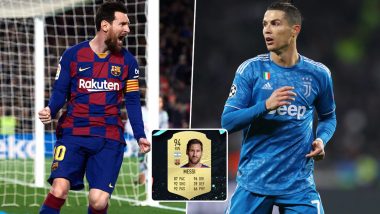 If you thought Lionel Messi winning a sixth Ballon d’Or trophy gave him an outright victory over rival Cristiano Ronaldo, then brace yourself for another win. According to reports, Messi could once again receive a higher rating then Ronaldo in EA Sports’ highly-anticipated game FIFA 21. The Argentina and Barcelona captain already had an overall higher rating than Ronaldo in FIFA 20and if predictions go well, Messi will not only have a higher rating than Ronaldo in FIFA 21 but will also have the highest Overall Ratings (OVR) in the EA Sports game. The release of FIFA 21 was initially thought to be delayed due to the coronavirus pandemic but reports have indicated that the game will be released as per the tradition in the final week of September. Lionel Messi's Instagram Account Mysteriously Disappears, Returns 40 Minutes Later.

According to a report from Sport bible, both Ronaldo and Messi will have the highest OVR for their respective leagues, which is the Serie A and the La Liga but Messi will be the highest-rated player in the game while Ronaldo will be second behind his closest rival. This Day That Year: Cristiano Ronaldo Played His Last Game For Real Madrid Winning his Fifth Champions League Title, Los Blancos Share Video.

The report also predicts that Kevin de Bruyne will be the highest-rated Premier League player in FIFA 21. Dexerto predicted that the six-time Ballon d’Or winner’s card will be upgraded from 94 to 95 in FIFA 21. It also said that “it could also make Messi the first ever to receive that ratings for a base card in Ultimate Team.” Ronaldo, on the other, will have his card upgraded from 93 ratings to 94.

Both Ronaldo and Messi have a world apart from the rest in the last decade or so and have shared most major awards between themselves since 2008, including the Ballon d’Or trophy. Luka Modric in 2018 became the first footballer to win the prestigious trophy and break the Messi-Ronaldo monopoly on the award. But Messi reclaimed it with a sixth win last season and will be eager to add more to his crown.

Messi missed the early stages of 2019-20 due to a foot injury but has inspired Barcelona to memorable win ever since his return in October. He has already scored 24 times in 31 appearances and also has 16 assists to his name. His magic has seen Barcelona lead the La Liga points table before the season was halted due to the COVID-19 pandemic. Ronaldo, on the other, is chasing his sixth European Golden Ball and has also been in fine form. He has already scored 25 goals in 32 matches for Juventus this season.

(The above story first appeared on LatestLY on May 27, 2020 02:59 PM IST. For more news and updates on politics, world, sports, entertainment and lifestyle, log on to our website latestly.com).