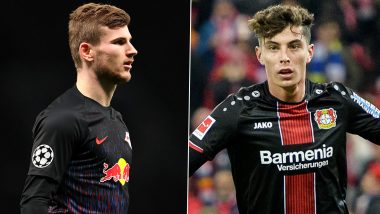 Though major European leagues have restarted their 2019-20 season during the week, several football clubs have been active off their field as they look to scout players for next season. The biggest transfer news this week was Chelsea announcing the signing of Timo Werner from RB Leipzig. The German striker will join the Premier League side in July once the current Bundesliga campaign ends by the end of the month. Timo Werner Transfer to Chelsea From RB Leipzig Complete, German Striker to Join Blues in July.

Football across Europe has returned after the coronavirus enforced break be it behind closed doors with no fans allowed inside the stadiums. Along with Timo Werner being the biggest news this week, we take a look at some other deals that have been making the headlines.

The Premier League giants completed the signing of Timo Werner from Leipzig on June 18, 2020 (Thursday). The German striker has scored 32 goals in 45 appearances this season and will join the Blues next month. However, he will not be able to participate in the Champions League season restarting in August. Is Timo Werner Eligible to Play for Chelsea in Champions League 2019-20 As European Football Competition Gears Up for August Restart?

The Brazilian defender is set to leave PSG in the summer and has been on the books of several clubs including Fiorentina and Everton. According to a report from Gazzetta dello Sport, the 35-year-old has been demanding wages of €10m per year which is putting off potential suitors for him.

Paul Pogba Will Stay At United

The Manchester United midfielder’s future has been a topic of debate since the start of the season with Real Madrid reportedly interested in the Frenchman. However, former Red Devil Peter Schmeichel has stated that ‘all the right people’ at United have convinced him that the world cup winner will not leave in the summer.

Napoli’s all-time leading goal-scorer has been tipped to move away from Naples in the summer with Chelsea rumoured as the favourites. However, the Belgian has put an end to all speculations and has signed a new deal with the club. The new deal will see him remain at the club until the end of 2022.

Bayer Leverkusen star Kai Havertz is now the most wanted superstar in the footballing world with the likes of Chelsea, Real Madrid, Bayern Munich and Manchester United all wanting to sign him. But according to reports in Spain, the 20-year-old is waiting for Real Madrid to make a move for him. Spanish outlet AS reports that Madrid youngster Renier Jesus could be involved in the deal.

(The above story first appeared on LatestLY on Jun 19, 2020 06:59 PM IST. For more news and updates on politics, world, sports, entertainment and lifestyle, log on to our website latestly.com).