Is Timo Werner Eligible to Play for Chelsea in Champions League 2019-20 As European Football Competition Gears Up for August Restart? 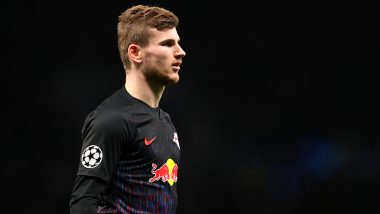 Chelsea and RB Leipzig have agreed on a deal which will see star striker Timo Werner move to the Premier League side in July, after the current Bundesliga season ends on June 27, 2020. Recently, UEFA announced the new schedule for the pending Champions League season, which was halted due to the pandemic, will be played entirely in August 2020. Now, this has raised the question of whether the German striker will play for his new club in the European competition. Timo Werner Transfer to Chelsea From RB Leipzig Complete, German Striker to Join Blues in July.

UEFA on Wednesday (June 17, 2020) announced that the remainder of the Champions League season will be played in a 12-day period with all the matches from quarter-finals onward being single-legged ties instead of the traditional two-leg matches. Majority of the matches will be played in Portugal with a decision pending on where to play the unresolved round of 16 ties. UEFA Champions League 2019–20 Set to Resume in August, Final to Be Played in Lisbon.

Along with the schedule, UEFA announced that three new players can be registered by each team for the season restart in August. With Timo Werner joining the Blues in July, there are questions on whether he can play for his new side and help them overturn the 3-0 deficit against Bayern Munich.

But the new Chelsea frontman will not be allowed to play in the remainder of the 2019-20 UCL season as according to the new set of rules, ‘Players registered and eligible for the club since the last registration date (February 3, 2020) are only allowed to play. It will not be possible for clubs to register newly-transferred players.’

Due to this, though Timo Werner joins next month, he was not registered as a Chelsea player in February and as a result, cannot take part in this season’s European competition. Speaking of RB Leipzig, once Werner joins the Premier League side in July, the 24-year-old will no longer be a player for the Bundesliga team and cannot represent them as well.

Leipzig are already through to the quarter-finals as they defeated Jose Mourinho Spurs over two legs. The draws for the next round of UCL matches will take place on July 10, 2020, at UEFA’s headquarters in Nyon.

(The above story first appeared on LatestLY on Jun 18, 2020 05:03 PM IST. For more news and updates on politics, world, sports, entertainment and lifestyle, log on to our website latestly.com).