Frank Lampard Birthday Special: From a Spectacular Against Barcelona to Audacious Chip vs Hull City, Top 10 Goals of the Chelsea and England Legend 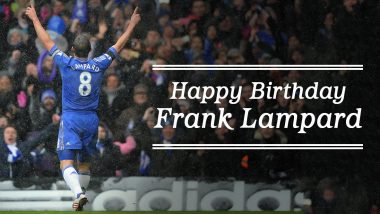 England and Chelsea great, Frank James Lampard celebrates his 42nd birthday on June 20, 2020 (Saturday). Widely celebrated as one of the greatest Chelsea players of all-time and among the greatest midfielders of this generation, Lampard returned to Chelsea as a manager in 2019 and has been at the helm of the club since then. Lampard is also regarded to be the among the greatest Premier League players and is one of the only nine players and the only midfielder to have scored 150 or more league goals during his playing career. He is also fourth in the Premier League’s all-time assist-makers with 102 assists to his name. Frank Lampard Wants Chelsea to ‘Freshen Up in Right Areas’ in Transfer Market.

Lampard started his career with West Ham before signing for London rivals Chelsea in 2001 and made his debut for the club in a 1-1- draw with Newcastle United. Three seasons, Lampard will go on to score the winning goal that landed their club’s first Premier League title in 50 years. For his spectacular season, Lampard was named the Premier League Footballer of the Year and also finished runner-up in the Ballon d’Or and FIFA World Player of the Year awards.

Frank Lampard left Chelsea in 2014 after making a record 648 appearances. He remains the fourth-highest capped Chelsea player of all-time. Lampard also scored 211 making him the club's all-time highest scorer. He retired from the game in 2017 after a season each at Manchester City and New York City. As Lampard celebrates his 42nd birthday, take a look at the top goals of his career.

One of his greatest ever goals, Lampard scored with a dink from the touchline of the right corner of the penalty box.

Lampard receives the ball some yards outside the Everton penalty box and cuts it back to his left-foot but slips after a trip from Phil Neville. He nonetheless goes through with the shot with his left boot and screams the ball into the top right corner.

Lampard received a pass from Claude Makelele and scored from 30 yards outside the Palace penalty box with a thunderbolt.

Lampard scored from a free-kick almost 30 yards out. The ball curled into the top right corner leaving the goalkeeper stranded and adding to Chelsea’s 7-0 win.

Lampard gives Chelsea the lead in an all London clash with one bolt of a free-kick from the outside of his boot, leaving the Fulham goalkeeper with no chance.

Lampard controlled Makelele’s cross with his chest, when he was back to the goal, then turned, swivelled and sent the ball into the net with a left-foot half volley.

Lampard scored his maiden England goal in 2003 with a spectacular shot from outside the box. England went on to win the game 3-1.

#OnThisDay in 2003: not a bad way to score your first #ThreeLions goal! 🚀 pic.twitter.com/2wFmIl7GBY

With Chelsea needing a win against Bolton Wanderers to clinch their first league title in 50 years, Lampard stepped up and scored. His first goal was breath-taking and showed his physical prowess. He also added a second in the 2-0 win. Lampard rated the first goal as one of the most memorable of his career.

After a melee inside the Hull City penalty box, the ball fell to Lampard who scored with an audacious dink above the goalkeeper’s head from the line of the penalty box.

Lampard added cherry to the cake in Chelsea’s 5-1 win against Tottenham with a wonderful free-kick from 30 yards out.

After calling adieu in 2017, Lampard returned to football as coach of Derby County in 2018 and led the club to EFL Championship playoffs and beat Leed United before losing to Aston Villa in the final. Months later, he was appointed as the head coach of Chelsea marking his return back into the club after a distinguished football career.

(The above story first appeared on LatestLY on Jun 20, 2020 09:00 AM IST. For more news and updates on politics, world, sports, entertainment and lifestyle, log on to our website latestly.com).