French Football Allows a Few Fans to Cheer for Teams in the Stadium for PSG vs Saint Etienne, French Cup Final 2019–20 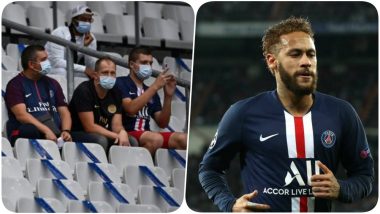 Fans in he stadium for PSG vs Saint Etienne (Photo Credits: Twitter)

For the first time, a few fans had been spotted into the stadium at the French Cup Finals 2019-20 which was held at the Stade de France. A few fans were spotted in the stands donning a mask for PSG vs Saint Etienne as Neymar Jr’s team retained the gong. The fans were barred from attending the matches as a precautionary measure to avoid the outspread of the coronavirus. The sporting schedules across the world had gone for a toss and no sports had been conducted for three months. Football Fans to Be Allowed in Rio de Janeiro Stadiums From July 10.

However, with things being normalised, a few fans have been allowed to cheer for their teams in the stadium. This is surely a good piece of news for the fans who have been waiting to cheer for the team in the stadiums. After the restart of the football leagues, La Liga, EPL and Serie A have been conducted behind closed doors i.e. in the absence of the fans.

French football is back for the first time since it was suspended.

And some fans are allowed in the stadium!

It's PSG v Saint Etienne in the French Cup final.

Talking about the match, Neymar Jr scored during the match and the teams remained on 1-0. The Saint  Etienne team could not score a single goal in the game and thus the team retained the honour. PSG had already been crowned as the winner of Ligue 1. They are yet to play the Champions League which beings in the month of August.

(The above story first appeared on LatestLY on Jul 25, 2020 08:54 AM IST. For more news and updates on politics, world, sports, entertainment and lifestyle, log on to our website latestly.com).