The Gunners have been in pursuit of the striker for quite some time now and it seems that they might get their man. Arsenal have had a verbal agreement with City over the signing of Gabriel Jesus with the move nearing its completion. 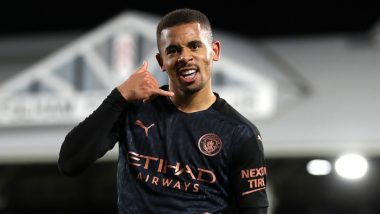 Gabriel Jesus' transfer to Arsenal seems to be getting closer every day with a recent report claiming that the Gunners have had a full verbal agreement to sign the player. According to notable Italian football journalist Fabrizio Romano, the deal to sign the player has been set at around £45m. Now, Arsenal would engage in agreeing personal terms with the player's camp and after it, the North London side would finally have their man. Matthijs de Ligt Transfer News: Chelsea Interested in Signing Juventus Defender

After having lost Pierre Emerick-Aubameyang last winter window and Alexandre Lacazette at the end of the season, the Gunners desperately needed attacking options. They took a giant leap by having Eddie Nketiah sign a new contract and now, it seems that they would have a second striker in Gabriel Jesus, soon. Mikel Arteta's prior experience of working with the player while he was an assistant coach at Manchester City would definitely come in handy for Arsenal next season. The Gunners have already made two signings in Fabio Vieira and Marquinhos.

Gabriel Jesus's playing time was significantly set to be reduced next season after Manchester City announced the arrivals of Erling Haaland and Julian Alvarez. Having a lot of experience playing in the Premier League, Jesus would bring an edge to Arsenal's attack and his title-winning experience would come in handy.

(The above story first appeared on LatestLY on Jun 25, 2022 04:47 PM IST. For more news and updates on politics, world, sports, entertainment and lifestyle, log on to our website latestly.com).