England football team manager Gareth Southgate will be seen in an episode of Mission Bear along with survivalist and adventurer Bear Grylls on Monday, a Discovery channel India statement said. The programme will be aired at 9 p.m. on Discovery Channel and Discovery HD world. 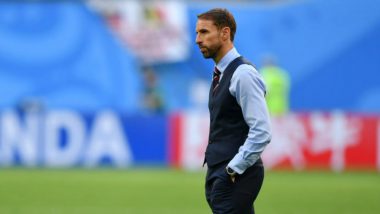 London, September 13: England football team manager Gareth Southgate will be seen in an episode of Mission Bear along with survivalist and adventurer Bear Grylls on Monday, a Discovery channel India statement said.

The programme will be aired at 9 p.m. on Discovery Channel and Discovery HD world. Southgate, who coached England to the semifinals of the World Cup last year, had once taken the squad to Dartmoor, a military training terrain for the marines and the commandos of the Royal army, the navy and the Royal Air Force of England.

The English football manager had decided to let the team train with the Royal Marines ahead of their World Cup campaign in Russia. Man vs Wild With Prime Minister Narendra Modi And Bear Grylls Becomes World’s Most Trending Televised Event With 3.6 Billion Impressions, Beats ‘Super Bowl 53' Show.

"Yeah, people talk a lot about pressure in our field we wanted the lads to see something different and, and realize that our pressure isn't really as extreme as other people.

"But also the Marines, their pride in the Green Beret, the pride in the badge - we have the three lions," Southgate was quoted as saying in the statement.

Southgate was also asked about his conversations with the players before a big game.

"We just try and find the balance of when we train we, we train really hard but there's a lot of down time as well and it's important that they enjoy each other's companies and they feel relaxed.

"In the summer (World Cup) when we were in Russia, recovery was an important part of what we did and having fun, whether the guys are warming up or recovering was key," said the former England defender who spent a lot of time at Crystal Palace, Aston Villa and Middlesbrough during his playing days.

Southgate is currently occupied with England's Euro 2020 qualification campaign. England beat Kosovo 5-3 at St Mary's in Southampton in their last game and are placed top of Group A with 12 points from four games.

(The above story first appeared on LatestLY on Sep 13, 2019 04:52 PM IST. For more news and updates on politics, world, sports, entertainment and lifestyle, log on to our website latestly.com).