Barcelona are reportedly ready to allow goalkeeper Pedro Neto to leave to raise fees for additions elsewhere in the squad. The club have made contact with Gianluigi Buffon and want to sign him on a free transfer once he leaves Juventus at the end of this season. Buffon joined Juventus from PSG in 2019 and has been at the Serie A club since. 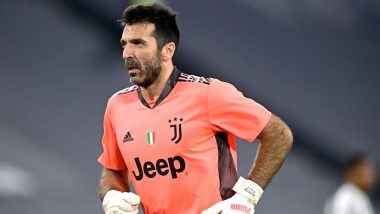 Juventus legend Gianluigi Buffon announced he will be leaving the club at the end of this season. Buffon, 43, joined Juventus in 2019 and is still contracted at the club. But the goalkeeper announced he will be leaving the Serie A club one his contract end this June. Buffon, however, has not hinted at a possible retirement leading to reports that Barcelona are eyeing the veteran goalkeeper and have made contact about the possibility of him joining the club as a free agent in the upcoming summer transfer window. Gianluigi Buffon Pens an Emotional Note for Juventus as He Announces Exit from Bianconeri, Says ‘Not an Easy Decision’.

According to a report from Foot Mercato, Barcelona are looking to bring Buffon as a cover from Marc-Andre ter Stegen and want to sign the Italian as a free agent. The Blaugrana club have reportedly made contact with the goalkeeper’s entourage and have expressed an interest to sign Buffon on a free transfer once he leaves Juventus. Cristiano Ronaldo Transfer News Update: Neymar Jr Expresses Desire To Play Alongside Juventus Star.

With the club under a huge debt, Barcelona have been linked with a number of would be free agent, including Manchester City’s Sergio Aguero and Eric Garcia, Lyon forward Memphis Depay and Liverpool midfielder Georginio Wijnaldum, all of whom are out of contract in their respective clubs at the end of this season.

The report also adds that Barcelona are ready to allow goalkeeper Pedro Neto to leave for a fee to raise funds for additions in other areas in the squad while bringing Buffon on a free transfer as a backup goalkeeper. ESPN adds that the club also sees Buffon as a perfect mentor to help nurture the young goalkeepers in the academy and also in the youth teams.

Barcelona will also hope the signing of Buffon allows Lionel Messi to extend stay at the club. Messi is rumoured to be looking elsewhere as his contract at Barcelona struggle to win trophies. The club recently won the Copa del Rey 2020-21 title but have fallen behind in the La Liga title race. Barcelona are currently second in the league table with 76 points from 36 matches, one point behind leaders Atletico Madrid who have a game in hand.

(The above story first appeared on LatestLY on May 12, 2021 03:38 PM IST. For more news and updates on politics, world, sports, entertainment and lifestyle, log on to our website latestly.com).