How To Watch Porto vs Juventus, UEFA Champions League 2020–21 Live Streaming Online in India? Get Free Live Telecast of Round of 16 Match & Football Score Updates on TV

But Andrea Pirlo’s side have been in fine form in the Champions League. They topped the group stages to qualify for the UCL knockouts for a seventh successive season and have also won each of their last three away games in the competition. They a great record against FC Porto and haven’t lost in their last five meetings in Europe. 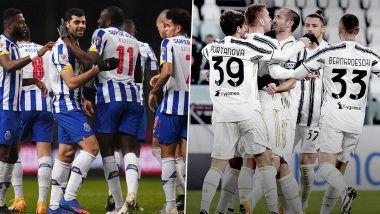 Juventus will look to return to winning ways when they visit Porto for the first leg of their UEFA Champions League 2020-21 round of 16 match against FC Porto. Juventus are winless in their last two matches across all competitions. They were first held to a goalless draw at home by Inter Milan in the Coppa Italia semis and followed it with a 0-1 defeat at Napoli in their previous match. The latter has left the Serie A champions fourth in the league points table and eight points far from the top spot after 21 rounds. Meanwhile, fans searching for how and where to watch the live telecast and live streaming online details for the FC Porto vs Juventus match in UCL last 16 should scroll down for all details. Cristiano Ronaldo & Paulo Dybala Included in 22-Member Squad for UCL 2021 Match Against Porto, Check Predicted Starting XI for POR vs JUV.

But Andrea Pirlo’s side have been in fine form in the Champions League. They topped the group stages to qualify for the UCL knockouts for a seventh successive season and have also won each of their last three away games in the competition. Cristiano Ronaldo Shares Note on UEFA Champions League Resumption, Hopes This Is the ‘Beginning of a Long Walk’ for Juventus Ahead of Porto Match.

They also a great record against FC Porto and haven’t lost against the Portuguese outfit in their last five meetings in Europe. Only once have both these sides met in the UCL round of 16 and Juventus won that tie 3-0 in 2016/17. But FC Porto have not conceded a goal at home in the Champions League this season and are also unbeaten in their last five matches in the competition.

FC Porto vs Juventus match in the first leg of the UEFA Champions League round of 16 will be played on February 18 (Wednesday midnight) at the Dragon Stadium in Portugal. The game will begin at 01:30 am IST (Indian Standard Time).

Fans in India can watch the Porto vs Juventus match live on Sony sports channels. Sony Pictures Network is the official broadcaster for the UEFA Champions League 2020-21 in India. Fans can follow the live-action of the first leg of round of 16 clash on Sony Ten 1, Sony Ten 1 HD, Sony Ten 2 and Sony Ten 2 HD channels on television. SonyLiv will be live streaming the match online for fans in India.

(The above story first appeared on LatestLY on Feb 18, 2021 12:02 AM IST. For more news and updates on politics, world, sports, entertainment and lifestyle, log on to our website latestly.com).