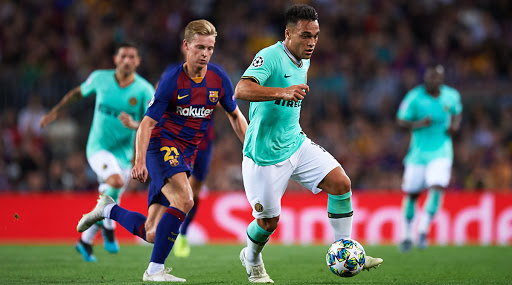 Inter Milan (INT) will host FC Barcelona (BAR) for a Group F clash in the UEFA Champions League 2019-20. INT vs BAR match will be played at San Siro on December 11, 2019 (Wednesday) at 01:30 am IST. The previous meeting between the sides ended with the Catalan side coming away with all three points thanks to a brace from Luis Suarez. The Italian side are second in the table, level on points with Dortmund and need to victory to confirm their passage into the round of 16. For fans of Dream11 fantasy game, here are some tips and team suggestions so you can build a strong team for the Inter Milan vs FC Barcelona clash in Champions League 2019-20. Lionel Messi Out of Barcelona Squad Against Inter Milan in UEFA Champions League 2019–20, Riqui Puig Called Up.

FC Barcelona have already confirmed their place in the knockout stages of the competition and also secured the top spot in the group. The Spanish giants will be without Lionel Messi for this clash as the Argentine is rested and will not travel with the squad. Alongside the Barcelona captain, Gerard Pique and Sergi Roberto have been rested while Arthur, Nelson Semedo and Ousmane Dembele will miss out due to injury. Inter Milan need a victory in this match to reach the knockout phase as anything other than a win may see Dortmund overtake them in the points table. The Italian side will without the services of Alexis Sanchez as the Chilean is still out due to injury. Barcelona Goalkeeper Marc-Andre Ter Stegen Overtakes Cristiano Ronaldo, Eden Hazard, and Many Others As He Records Yet Another Assist in the Season.

Inter Milan vs FC Barcelona, ISL 2019, Dream11 Team Prediction: Goalkeeper – Samir Handanovic (INT) should be selected as your keeper for this match.

Inter Milan vs FC Barcelona, ISL 2019, Dream11 Team Prediction: Midfielders – A lot of technically gifted midfielders are on show in this match, so picking four players in your midfield will be beneficial. The players should be Marcelo Brozovic (INT), Matteo Politano (INT), Frenkie De Jong (BAR) and Ivan Rakitic (BAR).

Inter Milan vs FC Barcelona, ISL 2019, Dream11 Team Prediction: Forwards – Lautaro Martinez (INT) will be the main threat from the Italian side and should be selected as your captain. Antoine Griezmann (BAR) has found his scoring touch in recent matches and should be your vice-captain. The other forward in your team should be Luis Suarez (BAR).

FC Barcelona have rested a lot of their key players for this match and it will be a good opportunity for the Nerazzurri’s to get a win and secure their place in the knockout stages.