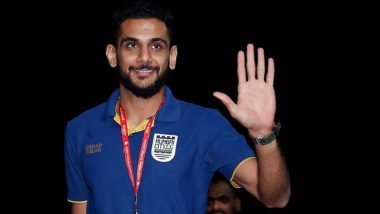 He made 17 appearances for the team over the course of the season after joining the team from Jamshedpur FC.

"After a year with #TheIslanders, Pratik Chaudhari leaves Mumbai City. Thank you for the commitment and your contribution to the club, @pratikch89. We wish you the best for the future! #ThankYouPratik #ApunKaTeam," Mumbai City tweeted on Tuesday. Kerala Blasters Retire Sandesh Jhingan’s No. 21 Jersey As Defender Parts Ways With ISL Club After Six Years.

Chaudhari had earlier made the announcement himself.

"After a season of having played for my hometown club @mumbaicityfc, must say was a special feeling of pride & honour. All thanks to the entire management, coaching staff & all my beloved fellow teammates at the club for the opportunity & love over the past year," he said in a series of tweets.

"It was a pleasure playing alongside & sharing the dressing room with each one of you. A big thank you to the amazing fans for the love & support throughout the season. As I move to take on a new challenge, I wish everyone at the club all the very best for the future."

(The above story first appeared on LatestLY on Jun 02, 2020 06:55 PM IST. For more news and updates on politics, world, sports, entertainment and lifestyle, log on to our website latestly.com).