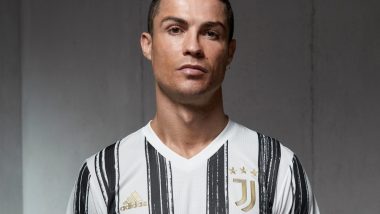 After losing their away game against Cagliari, Juventus released the home kits for the upcoming season of Serie A 2020-21. The snaps of Cristiano Ronaldo and team Juventus with the new kits went viral on social media. However, the fans were still angry with the Bianconeri for their pathetic performance against Cagliari and a few of them slammed the team for last night. Many of them even reacted to the jersey with hilarious memes of prisoners donning a similar outfit. The home kit had traditional stripes which were made up of brush strokes on the front. The brush strokes in black were drawn on the background of white. Cristiano Ronaldo Funny Memes Go Viral After Juventus Striker Lags Behind Ciro Immobile in Race to Win Golden Boot!

The club details were placed in golden font and Juventus. “Tradition is represented by the return of the black and white stripes which present themselves in a new and more modern form,” Juventus said. The club posted pictures of Cristiano Ronaldo, Paulo Dybala and others on social media. However, most of the fans were quite annoyed with the club for their performance and many others didn’t like the design. You can check out the photos and the tweets below:

Check out the reactions below:

That's awful. For me, all clubs should maintain, with few changes, the main shirt because it's a symbol of the club. If you want to be creative and for marketing purposes you have the second or third jersey to do the experience. Don't mess around with the main jersey.

Change your fucking playing style , change some dull players in squad or else you'll never win something big . Even I can manage this team pretty well , delever some good football

Truly awful. Worst Juventus kit I've seen. Those Juve black and white stripes were iconic. Last year messed with it. This year, some sort of stripes are back but the look dreadful tire track, maybe skid-marks.

The team has already lifted their ninth Serie A title. They will play against Roma in the upcoming game on August 2, 2020, on their home ground at the Allianz Training Center.

(The above story first appeared on LatestLY on Jul 30, 2020 08:39 PM IST. For more news and updates on politics, world, sports, entertainment and lifestyle, log on to our website latestly.com).