Juventus vs Atalanta, Serie A 2019–20: Maurizio Sarri’s Men Have No Room for Error in Search of Ninth Consecutive League Title 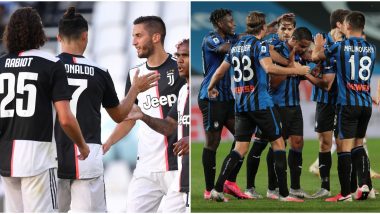 Juventus will take on Atalanta in the latest round of Serie A fixtures at the Allianz Stadium on July 11, 2020 (Saturday). The Bianconeri’s are at the top of the league table and currently hold a seven-point lead over second-placed Lazio. However, with seven games left in the season, tonight’s match could play a huge role in the title race as anything other than a win for Maurizio Sarri’s men could be damaging. Juventus vs Atalanta, Serie A 2019-20: Cristiano Ronaldo, Paulo Dybala and Other Players to Watch Out in JUV vs ATN Football Match.

Juventus had their unbeaten run since football’s restart from coronavirus suspension ended by rivals AC Milan as the Bianconer’s succumbed to a 4-2 loss. The Old Lady missed a chance to stretch their lead at the top to 10 points and this result could be crucial if they fail to win tonight against Gasperini’s Atalanta as well. Juventus vs Atalanta, Serie A 2019-20: Check Out Predicted Line-Ups for JUV vs ATN at Allianz Stadium.

The Bergamo side come into this game on the back of an outstanding unbeaten run as they are yet to lose or drop any points post lockdown. Atalanta have won six on the trot in Serie A, which includes victories against title-chasing Lazio and Italian heavyweights Napoli. So the Black and Blues will be hopeful of registering a victory against the record champions.

Ten points separate Juventus in first and Inter Milan in fourth but the gap could be reduced to seven if Giasperini’s men manage to get all three points from this clash and if the other results go against the Bianconeri’s as well.

Considering the remaining fixtures of Juventus in Serie A, failure to get a positive result tonight, could make it tricky for Maurizio Sarri’s men to secure the ninth straight league title. The record champions still have to face direct rivals Lazio, who could reduce the point gap even further.

So all three points is a must for Juventus in this clash against Atalanta if they are to settle the nerves and keep their lead at the top intact ahead of the tricky set of fixtures. The Bianconeri's still have to play relegation threatened Udinese and Sampdoria as well as Champions League chasing AS Roma.

(The above story first appeared on LatestLY on Jul 11, 2020 10:55 PM IST. For more news and updates on politics, world, sports, entertainment and lifestyle, log on to our website latestly.com).