The French defender was filmed kicking and slapping his cat in a video that had gone viral online with many condemning the act, calling him an animal abuser. Despite the controversy, Zouma continued to feature for West Ham in the Premier League, starting the match against Watford. 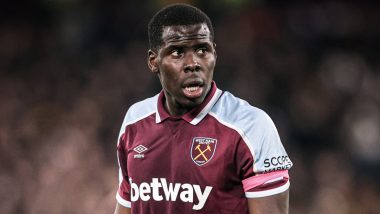 West Ham defender Kurt Zouma is set to be available for his side's Premier League match against Leicester City, as was confirmed by manager David Moyes. The French center-half recently was filmed kicking his cat in a video that went viral a few days ago with many netizens calling Zouma 'an animal abuser' and seeking his persecution for hurting the innocent feline. Despite the controversy, he was picked in West Ham's starting XI to face Watford in the Premier League a couple of days ago. After Mason Greenwood Loses out on Nike, Adidas Drops Kurt Zouma from Sponsorship Deal Following Cat Attack Video

That decision by Moyes drew a lot of criticism as well as many felt that the club should take action against the defender. But Moyes felt that Zouma should be part of West Ham's match against Leicester City on Sunday, February 13. "There are different views whether he should be available. We decided he should. I stand by that," BBC Sport quoted him saying.

Zouma's act of kicking his cat in a video has also led to him losing sponsors. Adidas has recently terminated its contract with the defender. Also, West Ham have lost out on sponsors too, with Experience Kissimmee pulling out of the club. The Royal Society for the Prevention of Cruelty to Animals (RSPCA) have also taken away the cats from Zouma as investigation into this issue continue.

Quite contrarily, Kurt Zouma's brother, Yoan, has been suspended by his club Dagenham & Redbridge until the investigation is complete on this issue. Despite calls for Kurt Zouma to be suspended, West Ham, who released a statement condemning the act of animal abuse, have reportedly stated that the player has been fined 'the maximum amount possible.' The amount is said to have been donated for animal charity.

(The above story first appeared on LatestLY on Feb 11, 2022 08:29 PM IST. For more news and updates on politics, world, sports, entertainment and lifestyle, log on to our website latestly.com).