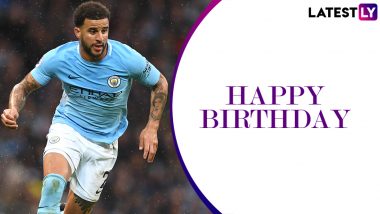 One of England’s best defenders, Kyle Walker celebrates his 30th birthday on May 28, 2020 (Thursday). Born in 1990, Walker started his professional football journey with boyhood club Sheffield United before moving to Tottenham Hotspur and eventually to Manchester City, where he has enjoyed a trophy-laden campaign, which includes two successive Premier League titles in 2017 & 2018. His transfer from Tottenham to Man City for an estimated £50 million is listed as one of the most expensive transfers for a defender in English football. Walker was also part of the England team that progressed to the semi-finals of 2018 FIFA World Cup.

Walker was born in Sheffield, South Yorkshire and joined the Blades as a seven-year-old. By 18, he was already playing for the reserve team and before going on a journey of loan spells in several clubs, which included the likes of Aston Villa and Queens Park Rangers. Walker made his Sheffield debut in 2009 against Swansea City and in the same season became the youngest Sheffield United player to play at Wembley when he appeared as a right-back against Burnley in the EFL Championship Play-off final. Take a look at some lesser-known facts about Kyle Walker on his birthday.

The talented full-back was soon roped in by Tottenham Hotspur and went on to make his Spurs debut against Portsmouth in 2010. He went on to spent more loan spells at other clubs before breaking into the first team playing XI in the 2011-12 season. He scored his debut Tottenham goal against Arsenal in a 2-1 victory in North London derby and then there was no looking back. He became a regular first-team player under Harry Redknapp and even won the PFA Young Player of the Year in 2011-12 beating the likes of Sergio Aguero, Danny Welback and Gareth Bale.

Walker joined Pep Guardiola’s Man City after eight years at White Hart Lane and won the 2018 EFL Cup as his career’s first trophy. It was also City’s first title under the Spaniard boss. Since then, Walker has gone to win two more league cups, two Community Shields, one FA Cup and two league titles at City.

(The above story first appeared on LatestLY on May 28, 2020 10:00 AM IST. For more news and updates on politics, world, sports, entertainment and lifestyle, log on to our website latestly.com).