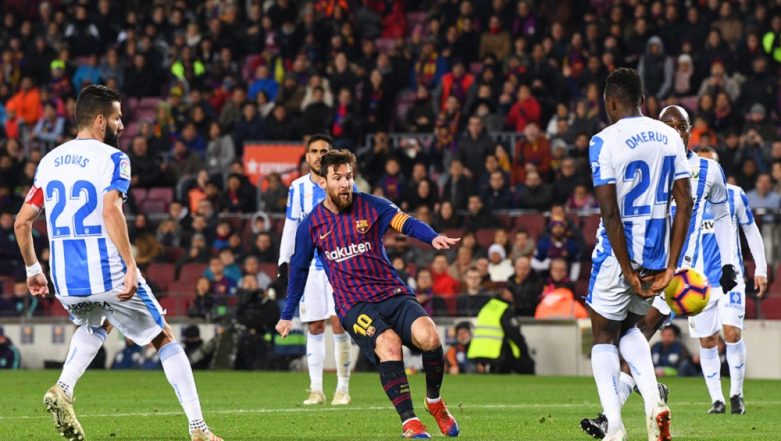 Barcelona, January 21: What started as the first big night for Ousmane Dembele with Barcelona turned into another shining exhibition by Leo Messi, who was only half hour in the game but time enough for him to power the team to a 3-1 win over Leganes. Messi watched the first 66 minutes of the game from the bench on Sunday night, a disappointment for many fans.

But everything changed when Messi took to the field, where until then Ousmane Dembele had been the team leader and who kicked off the scoring at minute 32 by finishing off a pass from Jordi Alba, reports Efe news. Dembele's eighth goal in La Liga above all served for the Frenchman to regain faith in himself. Lionel Messi Becomes First Player to Score 400 Goals in La Liga, Barcelona Hails the Feat (Watch Video).

Leganes was still in the game, however, and at minute 57, Braithwaite controlled a pass from En-Nesyri and put a shot from the penalty box into the net: the match was all tied up at 1-1. The tie changed Barca coach Valverde's ideas, so that seven minutes later he decided to put Messi and Rakitic in to replace Aleña and Arthur. Cristiano Ronaldo Beats Lionel Messi; Wins Best Player of the Year at the 2019 Globe Soccer Awards for the Third Time! (See Pics and Video).

But there were more complications: Dembele, who had been Barca's top player until then, left the game with an injury at minute 66. Five minutes later, with Messi now in the game, Barcelona struck again. He booted the ball, Cuellar blocked it and Luis Suarez took over to make the score 2-1 at minute 71. And it was Messi who finally won the game, working with Jordi Alba to slam the ball into the net at minute 92.