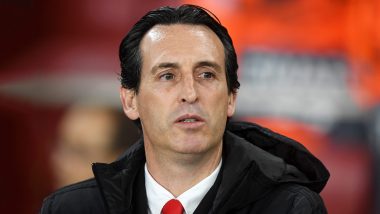 Villarreal, July 23: Spanish club Villarreal on Thursday announced Unai Emery as manager for the next three seasons. Emery was sacked as Arsenal's coach in November 2019 after 18 months at helm.

Emery, who has coached Almeria, Valencia and Sevilla in the Spanish top-flight before, will be presented as Villarreal manager at the their home ground on Monday. Santi Cazorla Leaves Villarreal, Football Fans Pay Tribute to Spanish Midfield Maestro.

"Unai Emery is a well-respected coach with vast experience in football around the world, and has managed top-level clubs such as Paris Saint-German and Arsenal FC," Villarreal said in a statement uploaded on their Twitter handle. "Furthermore, he also knows LaLiga perfectly, after two successful spells at Sevilla FC and Valencia CF." Arsenal New Home Kit for 2020–21 Season Unveiled, Fans Impressed With Jersey Design (See Reactions).

Emery started his managerial career with Lorca Deportiva and helped them secure promotion to the second division. After his first managerial experience, he moved to Almeria and got them promoted to LaLiga.

In the 2007/08 season, Emery arrived at Valencia, the club he managed for four seasons. On the bench at Mestalla, the Basque coach finished third in LaLiga on a total of three occasions, each of which saw Los Che qualify for the UEFA Champions League the following season.

After a brief spell with Spartak Moscow in Russia, Emery returned to Spain in 2013 to take over the reins at Sevilla. He scripted history with the club as he led them to three Europe League titles.

In his last role as manager, Emery took charge at Arsenal, with whom he was a UEFA Europa League runner-up in the 2018/19 campaign.

(The above story first appeared on LatestLY on Jul 23, 2020 07:06 PM IST. For more news and updates on politics, world, sports, entertainment and lifestyle, log on to our website latestly.com).