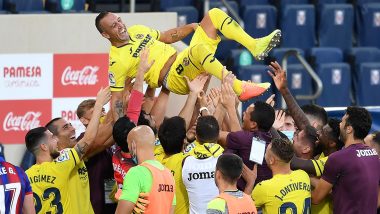 Santi Cazorla played his final game for Villarreal on Sunday (July 19, 2020) against Eibar in which the Yellow Submarines emerged as 4-0 winners. The little magician joined the Spanish club in 2018 from Arsenal following a spell of 636 days on the sidelines due to an Achilles injury. The 35-year-old made a huge impact in his third spell with the Spanish club, helping them to qualify for Europe. Real Madrid Clinch La Liga 2019–20 Title With 2–1 Win Over Villarreal; Twitterati Hail New Kings of Spain for Record League Victory.

The Llanera born footballer was sensational during the course of the campaign, as his 11 goals and 10 assists in La Liga, helped Villarreal secure a fifth-placed finish. In his final game with the Yellow Submarines, Cazorla assisted Andre-Frank Zambo Anguissa's 71st-minute opener and then was substituted to a standing ovation in the 82nd minute. Barcelona Reacts After Real Madrid Win La Liga 2019-20 Title, Check Tweet.

Santi Cazorla is one of the players, who has always impressed everyone with his talent, hard work and determination. So it was no surprise, that football fans paid their tributes to the Spanish midfielder.

Thank You for the Memories

The end of an era...thanks for the memories ..santi cazorla🙌🏾🙌🏾💯💫 pic.twitter.com/okYAJYUbCN

Santi Cazorla just substituted on his final game for Villarreal. Got an assist to cap it off, at 35, he has been involved in 24 goals this season (15 goals and 9 assists). 👏🏻👏🏻👏🏻 ❤️ pic.twitter.com/lEyckwdeX0

Today Santi Cazorla played his last game for Villarreal. This is how they revealed him as their new signing two years ago 😲. This little magician will always be in my heart, what a player ❤️. pic.twitter.com/wPYALAbNEw

‘I'm eternally grateful to this club and the fans for having opened the doors to me and for all the love they've shown me for so long, I've had a great time, but it's time to end this stage of my career. It's a decision I've thought about a lot. Every game I find it harder to give 100 per cent and I had to be honest with myself and the club.’ Cazorla said via the club's website.

‘I feel that this club is inside me. It isn't a goodbye, it's a 'we'll meet again', because Villarreal CF will always be my home.’ He added. The 35-year-old has been strongly linked with a move to Qatar side Al-Sadd who are managed by former Barcelona superstar Xavi Hernandez.

(The above story first appeared on LatestLY on Jul 20, 2020 04:09 PM IST. For more news and updates on politics, world, sports, entertainment and lifestyle, log on to our website latestly.com).