Messi, who quite recently became a free agent, ended his long wait for a maiden international trophy by winning the Copa America 2021 title with Argentina, beating arch-rivals Brazil in the final. 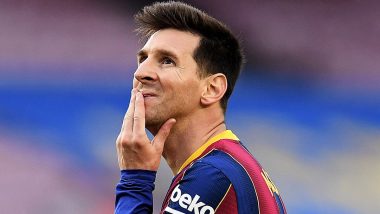 Discussions and negotiations are 'progressing adequately' for Lionel Messi's new contract at Barcelona, says club president Joan Laporta, after their talismanic forward became a free agent some time ago. Due to limits in the salary cap, the La Liga giants are yet to have a contract extension with Messi signed but Laporta remains confident that it would happen soon. Barcelona are reportedly making a lot of efforts in tying down their star player to a new contract. If Messi signs a new deal, he would have to take a substantial pay cut, owing to the club's poor financial condition. Lionel Messi’s Lifelong Dream Turns Into Reality as a ‘United’ Argentina Better Brazil at the Maracana in Copa America 2021 Final

"[Messi's renewal] is progressing adequately," Laporta said, while talking about the Argentine's future at the Camp Nou. Messi recently won the Copa America 2021 with Argentina by beating Brazil in the final, thereby winning his elusive maiden international trophy. He had been in form throughout the competition, scoring four goals and notching up five assists.

Messi was also presented the Best Player of the Tournament award and Laporta congratulated the playmaker, saying, "All the Catalans, Barcelona, Catalunya and the entire football world are happy because Leo won the Copa America. It is very exciting to see the best player in football history get excited about winning a title like this and he made all of us cry with joy. He is very happy, we are all happy, I am happy for Leo who has managed [to win the Copa America], together with his team-mates, and that Argentina are once again in the elite, and [I am] also [happy] for [Sergio] Aguero. I am happy for Messi's family, for Argentina, for Barcelona who are recognised, admired and loved for having this bond with Leo."

Last summer, Messi had publicly stated his decision to leave Barcelona with a year on his contract remaining but he decided to remain at the club where he grew from a boy to the star player he is, today. With him being a free agent, others clubs, potentially Manchester City, PSG and Inter Milan--all of whom have been linked to Messi in the past--could convince the six-time Ballon D'Or winner to join them. But Laporta has been very confident about the Argentine' future in Barcelona with reports stating that he would put pen to paper on a two-year deal.

(The above story first appeared on LatestLY on Jul 13, 2021 01:57 PM IST. For more news and updates on politics, world, sports, entertainment and lifestyle, log on to our website latestly.com).