Lionel Messi has found an able suitor in Manchester City, who share the same ambition, desperation and can afford him. Like Messi, Man City and their coach Pep Guardiola is desperate to win the Champions League. The club despite spending big for the last decade or so have failed to even progress to the UCL final. 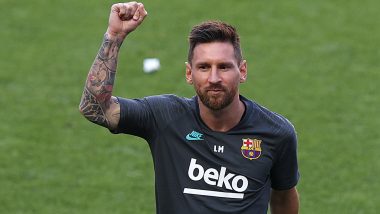 Lionel Messi will certainly redefine the transfer window as Neymar did it three years ago when he left Barcelona for Paris Sant-Germain in the summer of 2017. Messi also is seeking to leave Camp Nou this summer and has been linked with Manchester City, who are the overwhelming favourites to sign the Argentine. Messi informed Barcelona of his desire to leave the club through a burofax last Tuesday. The club, as anyone would expect, have refused to let him go and are dearly holding on to their most precious piece on a sinking ship.  Lionel Messi Transfer Latest News Live Update.

Messi’s desire to leave Barcelona certainly stems from the club’s failure to win the Champions League title in the past four seasons. In each of those four seasons, Barcelona have suffered humiliating defeats – 0-3 vs Juventus, 4-4 against AS Roma after leading 4-1 in the first leg, 3-4 vs Liverpool after being 3-0 ahead from the first leg and a 2-8 humiliation vs Bayern Munich in last season’s quarter-final – to exit the Champions League, a tournament Messi is desperate to win after four barren seasons. His last European title was in 2014-15 when Neymar still played for the Blaugrana club. Lionel Messi Agrees Personal Terms With Pep Guardiola’s Side, to Sign Five-Year Contract.

The 33-year-old has found an able suitor in Manchester City, who share the same ambition, desperation and can afford him. Like Messi, Man City and their coach Pep Guardiola is desperate to win the Champions League. The club despite spending big for the last decade or so have failed to even progress to the UCL final with their best finish still the 2016 semi-final appearance. Guardiola who led Barcelona to two Champions League wins (2009 and 2011) in three years has not won the elite European competition since.

Reports have suggested that Messi has already agreed on a five-year contract with City, which will see him end his career playing the MLS for City’s partner club New York City FC. Messi, 33, is almost past his best and the next two years could be his final seasons in the top tier of European football. Messi has signed a five-year deal with the City Football Group (CFG) and will earn €700 million (INR 60.85cr) in wages in that period.

City though have already escaped punishment after allegedly breaching UEFA’s financial fair-play (FFP) regulations and will not want to make the same mistake again. The club have drawn up a plan to sign the Argentine on a long-term contract, which will also involve New York City FC. Reports also suggest that Messi will be officially signed a New York City player but will spend three seasons in the Premier League. Here, we explain how City have planned to broker the deal with Barcelona

City are the front-runners for Messi and are eagerly waiting for Barcelona to allow the player to move. The Premier League club have done everything to ensure Messi leaves Barcelona for free and save then the humongous transfer fee. But in case, Barcelona demand a free, City have already planned to make a bid between 100m to 150m Euros. The CFG are also ready to offer players in a part player-cash deal. Bernardo Silva, Eric Garcia and Angelino are reported to be the players City are willing to offer.

Messi will sign a five-year contract Manchester City but will only play three years in the Premier League before joining partner club New York City FC. This is because Messi will have to be registered as a New York City FC player to help City avoid another FFP battle with UEFA. City are in no position to spend a massive sum on signing Messi and then pay him such high wages. That will certainly imbalance the club’s financial structure and also draw them into another FFP confrontation.

Now reports suggest Messi will be officially registered as a New York City FC player but will only join them after spending three seasons at Manchester City. New York City are a partner club and are owned by the City Football Group (CFG) which owns a number of football clubs worldwide, including India’s Mumbai City FC. Messi will join New York City FC in 2023 and will reportedly retire at the MLS club.

But City could still loan Messi from the MLS even after his three-year period in the Premier League comes to an end. In the past, they have loaned Frank Lampard from their partner club and could do a similar thing with Messi to keep the Argentine in England for a longer time.

(The above story first appeared on LatestLY on Sep 02, 2020 11:31 AM IST. For more news and updates on politics, world, sports, entertainment and lifestyle, log on to our website latestly.com).