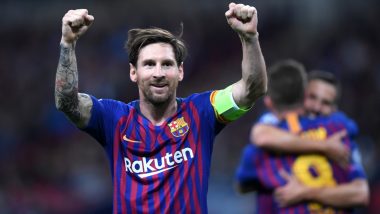 Lionel Messi is the greatest footballer of all-time feels former Spain and Real Madrid coach Vincente del Bosque. The 69-year-old, who led Spain to World Cup glory and the 2012 Euro Championship win, ranked Messi even above Diego Maradona. Del Bosque believes Messi has a dominance and a dribble never seen before in footballing universe. Messi scored the second goal in Barcelona’s 3-1 win (4-2 on aggregate) over Napoli that confirmed Barcelona’s place in UEFA Champions League 2019-20 quarter-finals. They face Bayern Munich in the next round on Friday. Upset Lionel Messi Refused To Shake Hands With Referee Cuneyt Cakir After Barcelona vs Napoli Match Following VAR Controversy (Watch Video).

"Messi is a player from the neighbourhood, from the streets. He has a vision of the game, a dominance and a dribble that is not seen in today’s world,” Del Bosque was quoted as saying by Mundo Albiceleste. “And he does it where he needs to do it, which is near or in the penalty area. He’s presently the best player in the world.” Lionel Messi Injury Update: Barcelona Coach Quique Setien Confirms Argentine Star Took a ‘Fierce Knock’ on Left Leg During UCL 2019–20 Match Against Napoli.

Del Bosque, who coached Real Madrid to two La Liga titles and two Champions League trophies during his stint with the Los Blancos between 1968 and 1984, also had his say on the Messi-Maradona debate. “Messi was a great heir to Maradona and I think he has already surpassed the master,” said Del Bosque. “Messi is the best player of all time. Maybe someone can refute it.”

Messi is the only footballer to win six Balon d’Or titles and will be chasing his fifth Champions League crown with Barcelona. The club have failed to win the top European competition since 2014-15 and are desperate to clinch it this time. The 2019-20 Champions League win is also Barcelona’s final opportunity this season to end the campaign with at least one trophy.

(The above story first appeared on LatestLY on Aug 10, 2020 03:40 PM IST. For more news and updates on politics, world, sports, entertainment and lifestyle, log on to our website latestly.com).