Lionel Messi already missed the opening two months of the current season due to a calf injury he suffered in the pre-season and another injury could not only hamper his season but also disrupt Barcelona’s chances of winning their third consecutive La Liga title. They currently lead Real Madrid by two points with 11 rounds remaining. 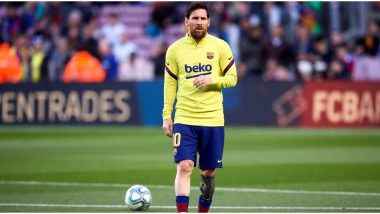 With less than two weeks remaining for La Liga 2019-20 resumption, Barcelona might have hit a problem with Lionel Messi. The Argentine superstar was absent from the team training session on June 3 (Wednesday) putting doubts about his participation when the league resumes next week. With just 10 days remaining before their first La Liga match away to Mallorca post the COVID-19 halt, Barcelona would not have wanted any injury troubles but seems to have gotten involved into one with their captain and talisman said to have suffered a thigh muscle strain. Lionel Messi Puts Exit Rumours to Rest, Chooses to Stay at Barcelona This Summer.

Reports from the Barcelona camp stated that the reason Messi was absent from training session on Wednesday was because he ‘underwent an alternative training program at the gym.’ It also stated that precautions were taken to ensure Messi does not strain his calf muscle, which had kept him out from the opening two months of the season. But according to reports in the Spanish media, that may not be the exact case. The 32-year-old might have suffered a new injury keeping him off the training. La Liga 2019–20 Resumes: From Lionel Messi to Luis Suarez, Take a Look at Top Five Goalscorers and Assist Makers in Current Season.

According to Catalan channel TV3, Messi has suffered a thigh muscle problem on his right leg at the end of Tuesday’s practice session. On Wednesday, he had gone for an MRI scan to determine the cause of the pain on his right thigh and also the real extent of the injury. Barcelona, however, did not confirm whether Messi underwent any test at all. The players were given a break from practice on Thursday and will return the next day.

But TV3 stated that Messi might have suffered a microtear, which will rule him out from taking part in Barcelona’s first league game after a three-month hiatus. Barcelona faces Mallorca on June 13 which will be the start of 11 successive games in just five weeks to complete the La Liga 2019-20 season. The Catalan club are yet to confirm if there is an injury and how long will Messi take before making a return.

The Argentine already missed the opening two months of the current season due to a calf injury he suffered in the pre-season and another injury could not only hamper his season but also disrupt Barcelona’s chances of winning their third consecutive La Liga title. The defending league champions currently lead Real Madrid by two points with 11 rounds remaining.

Messi is also the leading goalscorer in the league with 19 goals in 22 matches and has scored five more times than the next best Karm Benzema who played in 26 matches. He is also leading assist maker with 12 to his name and will be a big miss if he is injured. Barcelona are already Ousmane Dembele, who is still recuperating from a hamstring problem while centre-back Clement Lenglet will miss the trip to Mallorca due to suspension.

(The above story first appeared on LatestLY on Jun 04, 2020 07:46 PM IST. For more news and updates on politics, world, sports, entertainment and lifestyle, log on to our website latestly.com).